First of all, AMERiders wants you to Thank a Veteran This Veterans Day for Their Sacrifice and Service to our Country. Show them how appreciated they are. Sunday is Veterans Day. This annual event often gets overlooked on the calendar in the run-up to Thanksgiving and the December holidays. But this Veterans Day is special. It’s the 100th anniversary of the unofficial end of World War I.

A Bit about Veteran’s Day

The actual peace treaty wasn’t signed until later, but November 11, 1918 — at the 11th hour of the 11th day of the 11th month — is when a truce called an armistice (pronounced ARM-iss-tiss) was signed and the fighting stopped.

One year later, President Woodrow Wilson declared November 11 Armistice Day. Other countries did the same, some calling it Remembrance Day. In this country, Armistice Day was renamed Veterans Day in 1954.

World War I was one of history’s largest wars. Most of the fighting was in Europe, but 30-plus countries took part, including the United States. More than 29 million soldiers worldwide died or were wounded, and an estimated 13 million civilians died — a horrific toll that led to it being branded “the war to end all wars.”

A poster for all

Each year, a U.S. competition is held to design a poster for Veterans Day. The winning entry appears on pins and on the cover of the program for a ceremony at Arlington National Cemetery.

This year’s theme, “The War to End All Wars,” drew about 80 entries. Adam Grimm, whose design won, kept it simple. His poster has a large red poppy, the worldwide symbol for remembering World War I (see box); barbed wire to show the brutality of the war; and the pink hue of a rising or setting sun, showing the passage of time.

Many Americans confuse Veterans Day with Memorial Day, another U.S. holiday related to the military.

Memorial Day began as Decoration Day in the 1860s following the Civil War. After World War I, its meaning changed. It honors U.S. military who died in any conflict, and it is observed on the last Monday in May.

Veterans Day also reflects a new meaning from the original Armistice Day, which honored all who served in World War I, but especially those who died. By 1954, the United States had fought in World War II and the Korean War. Lawmakers decided to rename the day to honor all American military, past and present, whether they served in war or peace.

In the 1970s, Veterans Day was observed on the fourth Monday in October so workers could have a three-day weekend. But it was an unpopular change. Many people liked the holiday’s connection to the armistice signing. So, since 1978, U.S. veterans have been officially honored on November 11.

I personally look at it this way someone can use this little helper to use it as a way to remember the difference between the two Memorial has the same as Memory in it, Memorial=Memory which is to remember.

The poppies of Flanders

In Flanders fields, the poppies blow

In 1915, a Canadian doctor and soldier, mourning a friend’s death in battle in the Flanders region of Belgium, wrote a poem noting how quickly poppies grew around the soldiers’ graves. The bright red wildflowers were a sign of life in a bleak landscape.

The poem “In Flanders Fields” (the opening lines are printed above) became very popular, and the red poppy became a sign of remembrance. People started wearing silk poppies to honor the war dead. To mark the 100th anniversary of the start of the war, 888,000 ceramic poppies filled the moat at the Tower of London in 2014.

Arlington National Cemetery hosts a free public ceremony every Veterans Day. It starts at 11 a.m. with a wreath-laying at the Tomb of the Unknowns. Shuttle buses begin running at 8 a.m.

Three unidentified Americans from different wars are buried at the site. A large marble box rests atop the grave of the World War I Unknown. There used to be four graves, but because of advances in medicine and science, the Vietnam Unknown was identified in 1998 and reburied elsewhere.

Here is a way you can commemorate the 100th anniversary

in school we have all been taught and learned about the many millions of soldiers and civilians that were killed in World War I, a global conflict so devastating that, at the time, it was known as “the war to end war.” On Nov. 11, Veterans Day, the world will mark the 100th anniversary of its end — the fighting stopped at the 11th hour of the 11th day of the 11th month — and the day will be commemorated around Washington with exhibits, tours, and events. Here is a selection of some you can attend if you are in the area: 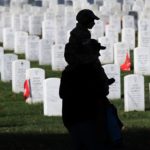 Arlington has many ties to World War I, including the Tomb of the Unknowns, which was erected to hold the remains of a soldier from World War I; the Argonne Cross Memorial, dedicated to Americans buried in France; and memorials to chaplains and nurses who served in the war. On Veterans Day, there will be a wreath-laying ceremony at the Tomb of the Unknowns, followed by a program in the Memorial Amphitheater. Sunday at 11 a.m. at Arlington National Cemetery, 1 Memorial Dr., Arlington. Gates open at 8 a.m. Visitors are encouraged to get there by 9:30 a.m. Free.

“Echoes of the Great War: American Experiences in World War I” is a hefty multimedia exhibition that tells the story of the war on both sides of the Atlantic through restored film footage, vintage maps, and photographs, soldiers’ letters home and the diaries of Gen. John J. Pershing. Through Jan. 21, 2019, at the Library of Congress, 10 First St. SE. Free. Note: The library is closed on Sundays, including Veterans Day. On Saturday, the library will host a symposium, “The Road Back: Veterans and Literary Writing,” which includes tours, a panel discussion and a film screening.

The Smithsonian’s major commemoration of the Great War is a day-long event that will include reenactors; 15-minute “lightning talks” on how the war changed American society; displays of historic objects that are usually kept in storage; and hands-on family activities. The museum’s theater will screen veteran-related films all weekend, and there are multiple World War I exhibits, including “Uniformed Women in the Great War” and “Advertising War: Selling Americans on World War I.” Sunday from 10 a.m. to 5:30 p.m. at the National Museum of American History, 12th Street and Constitution Avenue NW. Free, except for the film screenings.

It might come as a surprise to visitors to Washington that there’s no national memorial to World War I: The temple-like shrine on the Mall is dedicated only to veterans who hailed from the District of Columbia. Plans are afoot, however, to turn Pershing Park — which features a statue of General of the Armies John J. Pershing — into a national memorial. Organizers will be hosting a “first look” preview in Pershing Park, with discussions about the roles Native Americans, women, and minorities played in the war; live music; and a World War I film festival. Through Monday at Pershing Park , 15th and E streets NW. Open 11 a.m. to 5 p.m. Events are free, but some require reservations.

When World War I broke out, in 1914, President Woodrow Wilson was determined to keep America neutral; his successful 1916 reelection campaign even used the slogan “He Kept Us Out of War.” (Five months later, however, he asked Congress for a declaration of war against Germany.) Wilson purchased a house in Kalorama after leaving office, which is now a museum and memorial. On Veterans Day, tours of the house will be offered every hour on the hour. Sunday from noon to 4 p.m. at the Woodrow Wilson House, 2340 S St. NW. Adults $5-$10, children younger than 12 free. Admission is free for veterans and their families on Sunday.