The 2017 Daytona Bike Week Is Underway and in Full Swing Check It Out! AMERiders brings you a bit more goings on of the fun and frolicking in Florida. As the rumble of motorcycles echoes through Daytona Beach with the 76th annual Bike Week well underway. Half a million visitors are expected to crowd the streets of Daytona Beach.
the city has fine-tuned the way it manages traffic and crowds. “We’ve been doing this for a while,” said Police Chief Capri stated. “We have people come from other parts of the country to watch how we do things, how we move traffic and work people as far as moving them.

We have probably three major super bowls every year: Race week, bike week and Spring Break.”  Students on Spring Break are in Daytona Beach this week as well. Capri says Bike Week has evolved into a countywide event over the years, but most visitors end up on Daytona Beach’s main street at least once during the week. “It’s more of a Central Florida event,” said Capri. “There are events going on in Flagler County and even down in Orlando at the Harley shop there. Lake County has a little bit of it of Daytona Bike week going on as well.” 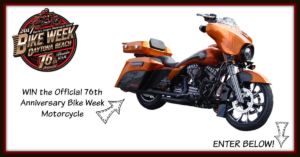 Customized 2010 Harley-Davidson® Ultra Class!
Each year, The Daytona Beach Community Foundation holds a drawing for the Official 2017 Daytona Bike Week Motorcycle. It only takes $50 to enter the drawing. Since there are only 4500 tickets printed, the odds of being a winner are incredible. A winner for the drawing will be selected at Approximately Noon on Saturday, March 18, 2017, at Riverfront Park on Beach Street in Daytona Beach. You DO NOT have to be present to win!  2912 TICKETS SOLD AS OF 3/10/2017
ENTER TODAY!  *See Official Rules and regulations when entering online!*

Events and other News…..

But what is going on and what is happening that you would like to know about during bike week? Here are a few that will happen in the next day or two… and a special surprise at the end of the post. 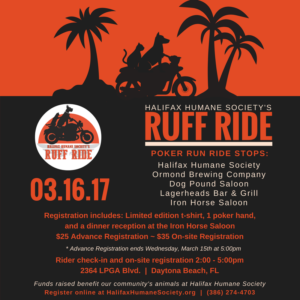 Calling all animal lovers – and yes, that includes hogs! We would love you to join us for a fun and scenic ride poker run – Ruff Ride – in support of the Halifax Humane Society and our community’s homeless animals! The event begins at Halifax Humane Society where you can mingle, socialize and even take part in a special behind the scenes tour of our shelter before heading out on the run.

Poker run stops include 1. Ormond Brewing Company, 2. The Dog Pound Saloon, 3. Lagerheads Bar & Grill with the grand finale stop at 4. The Iron Horse Saloon. All poker run location stops are friends of the Halifax Humane Society. Because our friends across the community are graciously hosting the 2017 Ruff Ride, 100% of the proceeds raised this evening to go directly to care for the animals at Halifax Humane Society. Come join us – you will have a great time while helping us to raise money and awareness!

The Charlie Daniels Band in Concert 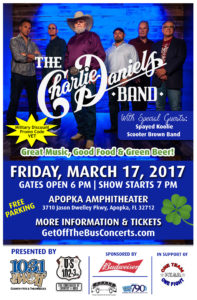 Awww, come on who doesn’t love Charlie? If you do hurry as The Charlie Daniels Band is in Concert on Friday, March 17th (don’t forget to wear your green as it is also St. Patrick’s Day as well)  Here’s the information.

Gates Open at 6. Show at 7. to 12 am  Orlando’s New 103.1 The Wolf, The New Us 102.3 and Get Off The Bus Concerts are pleased to present The Charlie Daniels Band live in concert on Friday, March 17 at the Apopka Amphitheater with special guests Spayed Koolie and Scooter Brown Band. The gates will open at 6 pm and the show starts at 7 pm. This concert is in support of One Team One Fight 4 PTSD www.oneteamonefightptsd.org. Join us for Great Music, Good Food, and Green Beer. Tickets to The Charlie Daniels Band can be purchased online at GetOffTheBusConcerts.com. Use promo code BIKE to receive $10 discount off tickets. Free parking will be provided.

Last but not least Drum roll……

It’s never too early to plan to attend next years event… Join us for the 77th Anniversary of Bike Week in Daytona Beach from March 9 – 18, 2018.

Let AMERiders help you keep up to date on information and news of 2017 Daytona Bike Week.