AMERiders is bringing you the down-low on the Harley-Davidson 2017 Road King Special. HD rolled out a new look for an old special with this one, new styling and design elements wrapped around the relatively new Milwaukee-Eight engine make this a thing of beauty. Harley has put this new bike into the “custom bagger” niche, as it has trim-fitting saddlebags, a lowered fender, and a low-mount license plate, contributing to a shorter, tighter profile.

Meet the Blackout on this baby!

Harley-Davidson Designer- Stylist Dais Nagao, states that “Chrome was retained only on some key engine components. The lower rocker boxes, pushrod tubes, and tappet blocks are finished with chrome to emphasize the V-Twin shape of the Milwaukee-Eight 107 engine. We added a new engine-turned air cleaner insert, a finish that’s also featured on the tank console.”

Other black surfaces featured on the 2017 Road King Special are its engine guard, handlebar and hand controls, mirrors, turn signals, engine covers, air cleaner cover, mufflers and exhaust shields. New gloss black turbine cast-aluminum wheels include a 19-inch front wheel topped by a low-profile fender. At the rear, stretched saddlebags flow over the mufflers to provide a slammed-to-the-ground appearance without reducing suspension travel. A rear fascia panel fills the space between the saddlebags and rear fender, and a low-mount license plate module completes the tight, low lines of the rear end.

Powered by the new Milwaukee-Eight Engine

All the 2017 touring models, get the new Milwaukee-Eight engine which offers quicker throttle response, more passing power, purer sound, a smoother ride and more of the feeling riders want from a Harley-Davidson Touring motorcycle engine.

More Power Each Milwaukee-Eight engine produces 10% more torque than the engine it is replacing in current touring models. In addition to increased displacement, it features a higher compression ratio and 4-valve cylinder heads with 50% more intake and exhaust flow capacity, and more. 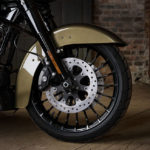 Quicker Acceleration The Milwaukee-Eight engine weighs the same as the engines it replaces, so its extra power contributes directly to improved acceleration performance. It accelerates 11% quicker from 0-60 mph, equal to a two-to-three bike length improvement, and 11 percent quicker from 60-80 mph in top gear, equal to a one-to-two bike length improvement, compared to the Twin Cam High Output 103.

As well as Improved Fit A new, slimmer primary drive cover and the low-profile shape of the air cleaner cover provide improved rider legroom around the engine and an easier reach to the ground for many riders. All Milwaukee-Eight powered models are fitted with an assist and slip clutch with improved hydraulic actuation and 7 percent less clutch lever effort.

Harley-Davidson says that You will sit taller, feel more assertive and ride more aggressively behind the new 9-in-tall, 1.25-inch wide mini-ape handlebars on the 2017 Road King Special. The blacked-out, stand-out look says custom all the way, they may look custom but come standard on this bike. 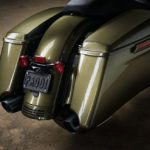 It has an ultimate touring saddle features a sculpted seat with a deeper contoured bucket and narrower neck, to relieve pressure on your thighs, while providing more back support and comfort for a wide variety of rider sizes. And the lower seat height — 26.4 inches to be exact — puts your feet closer to the road to enhance your confidence. Additionally, the leather trim and premium stitching accentuate the advanced ergonomics while giving the seat that sharp detail you only find on a Harley-Davidson®motorcycle. It’s science in service of comfort, and your way to beat fatigue over the long haul. They also stretched out the saddlebags as well to give the bike a slammed profile.

As Harley-Davidson Puts it ……. 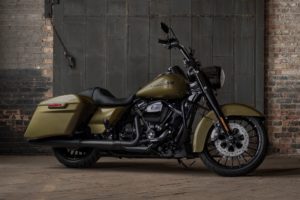 “It is Pure design and Unadulterated power. You can see it coming from a mile away. Big and dramatic like a locomotive rolling through a train yard at midnight. Blacked-out from its headlight nacelle front forks and new wheels to its powerful Milwaukee-Eight® engine, headers and exhaust. With new mini-ape handlebars that pull you up and forward for an upright stance that commands attention. Stripped-down styling and stretched saddlebags for a slammed profile that’s right here, right now. When you take to the road on the new 2017 Road King Special, you don’t just rule the road. You own it.”

Let AMERiders keep you up to date on information about Harley-Davidson’s 2017 Road King Special.