The 77th Annual Daytona Bike Week is in the homestretch to completion and if you haven’t gone and had your fun you still have until Sunday to do so. AMERiders thought that we would bring you some Bike Week News that is going on this week. Things you can find on their Facebook Page and some Bike Week News you can’t. 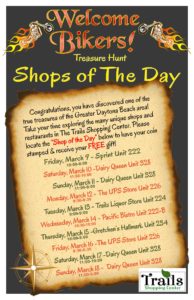 The Trails Shopping Center is just one of 11 stops on the 2018 AMSOIL INC.Treasure Hunt! Be sure to check which store is the “Shop of the Day” to get your guide stamped. When you have visited every stop in the Treasure Hunt, bring your Bike Week Pocket Guide back to the Official Welcome Center Tent on Beach Street to receive your commemorative 77th Bike Week coin (while supplies last)! 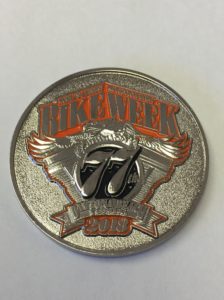 Be sure to hit all the locations on the 2018 AMSOIL INC. Treasure Hunt, then bring your completed passport back to the Official Welcome Center tent on Beach Street. We’ve already handed out more than half of the 750 limited-edition commemorative Bike Week coins. Don’t wait! Get yours before they are gone! 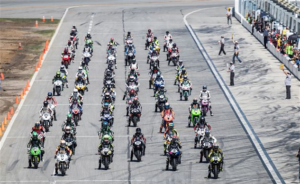 Here is a juicy tidbit for your Bike Week News Not in Daytona this week? Don’t have a cable TV subscription? No problem… The Daytona 200, as well as the Daytona TT, will both be available to watch live when streamed for free on FansChoice.TV. It doesn’t get much easier than that!

FansChoice.tv will once again provide live streaming coverage of both the 77th DAYTONA 200 American SportBike Racing Association (ASRA) race scheduled for Saturday, March 17 at Daytona International Speedway and the Harley-Davidson TT presented by Russ Brown Motorcycle Attorneys at DAYTONA on Thursday, March 15. Motorcycle fans can go online at www.FansChoice.tv and watch both events free of charge.  …Read more here about it.

What no one ever wants to hear during bike week

Motorcycles, bikinis, and beer are all the rage as Bike Week continues in Daytona Beach.

But as tens of thousands of bikers crowd into the city for the 76th year in a row, a new study was released that shows Florida leads the nation in motorcycle crash deaths.

In 2015, 606 motorcyclists died, a figure that has climbed 30 percent since 2014, according to the study by AAA. The number of motorcycles registered in the state rose by about 3 percent during the same time period.

The study also shows that motorcycles account for 3 percent of registered vehicles, yet they are involved in 20 percent of vehicle fatalities in the state.

In the first weekend of Bike Week, which started Friday, at least three major motorcycle crashes happened in Volusia County. Two people died and six were injured, all in less than 24 hours.

“We normally do see an increase in the number of traffic fatalities, but we’ve all been saying how this year seems to be busier than the last eight years,” said Daytona Beach Police Sgt. Kelsey Harris. “It’s been bad out there for crashes, and between everything else going on, it’s keeping us very busy.” … read more here from the Orlando Sentinel

-On Sunday, a biker died after she hit a curb on International Speedway Boulevard about 1:45 a.m., Daytona Beach police said. Her name was not released because her family hadn’t been notified.

-On Saturday, a driver blew through a red light at Main Street and Halifax Avenue in Daytona Beach and rear-ended two motorcycles, and then continued into the intersection and hit a third motorcycle, a pedestrian and two other vehicles, according to police.

-Two motorcyclists and the pedestrian were hospitalized with serious injuries.

-Another crash Saturday led to one biker dying and three others were hospitalized.

-Bruce Jussila, 75, of Kissimmee did not slow down for traffic on Interstate 4 on Saturday and drove his Harley-Davidson into the back of another Harley about 10:20 a.m., Florida Highway Patrol troopers said. He had minor injuries, but his passenger, Marianne Jussila, also 75, was seriously hurt.

Let AMERiders keep you up to date 2018 Bike Week News.