Riding a motorcycle can be a lot of fun, but it’s also dangerous. A lot of it has to do with inexperience, but it’s not always inexperienced riders who end up in the hospital. Just last week, a friend of mine who has been riding for ten years without incident found out the hard way that it’s not a matter of if you wreck but how long it will be until you wreck your bike. You can’t avoid every accident, but keeping your eyes up and paying attention to the road will help you spot threats and make better decisions no matter what is happening. AMERiders wants to make sure that you as riders, make sure you’re focusing on these Biggest Risks to your own safety. 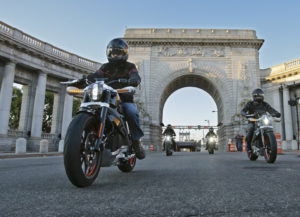 A driver doesn’t even need to hit a rider directly since even being clipped by an oncoming car can knock a rider from his bike. Sadly, keeping a constant eye on traffic and riding like everybody is out to kill you is the only way to minimize your risk of colliding with oncoming traffic. 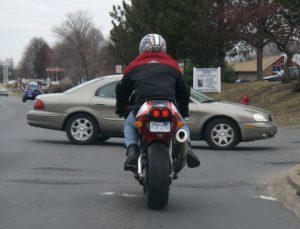 Intersections are about and is one of the Biggest Risks to your own safety as it gets, and part of that has to do with drivers making careless left turns. Motorcyclists all have stories about narrowly avoiding a collision with a car pulling out in front of them, and sadly, far too many have stories about actually being hit by those cars.

Drivers need to put down their cell phones and pay better attention to what’s going on around them, but riders need to also pay extra attention while riding through intersections. That added vigilance could save a life. 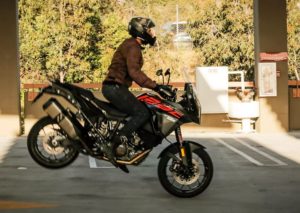 There’s always a potential for a wreck when someone has to slam on the brakes, but it’s always more dangerous when you’re on a motorcycle. Since your front brake provides 70% of your stopping power, you have to use it, but if you grab the brake too hard, locking up your front wheel and throwing yourself off the bike are always risks.

Buying a bike with anti-lock brakes will help mitigate this problem, but if you don’t have ABS, it’s even more important to learn how your bike handles under heavy braking. That way you’ll be ready the next time you have to slam on the brakes to avoid hitting the car in front of you and lower one of the Biggest Risks to your own safety.

4. Gravel on the road 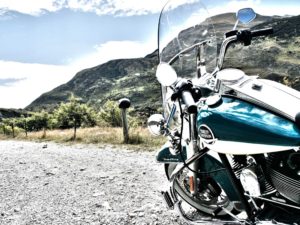 Motorcycles are very good at going around corners in normal situations on normal roads, but when you start throwing obstacles into their path, that’s when things get tricky. Sticks, dirt, and even roadkill can be difficult to handle, but the worst road obstacle is gravel.

Gravel kills your grip, causing your bike to behave unpredictably and easily causing a wreck as well as being one of the Biggest Risks to your own safety. If you’re going to go down, a low-side fall is about as good as it gets. Unfortunately, riders trying to recover from hitting gravel can easily high-side as well, which is much more dangerous.

5. Too much speed through a corner 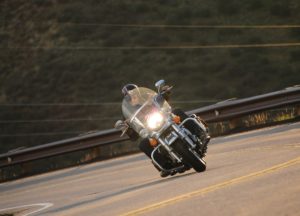 One of the best things about motorcycles is that they’re fast. For the cost of a new Honda Civic, you can buy a bike that will hold its own against quarter-million-dollar supercars. Experiencing raw, unbridled speed for the first time is intoxicating, but it’s also dangerous.

In a straight line, most riders don’t get themselves in too much trouble, but learning to take a corner is much more difficult. New riders are especially at risk of taking a corner too fast, but even experienced riders occasionally make mistakes and can this is a reason it is one of the Biggest Risks to your own safety.

This isn’t usually a problem once you’re out on an open road since drivers rarely open their doors while moving, but in cities, riders have to be on the lookout for people opening their car doors. Cyclists have dealt with this problem for years, but it’s even more dangerous for motorcycle riders who often travel at faster speeds than bicycles.

Riders in California also have to be on the lookout for jealous drivers who don’t like that lane splitting is legal. Despite the fact that they’re putting someone else’s life at risk, those drivers have no problem opening their doors to prevent riders from splitting lanes. So watch out for those car doors they are one of the Biggest Risks to your own safety.

You would think drivers would care more about not murdering people, but despite the increasing number of motorcyclists on the roads and cars with blind spot monitoring systems, drivers still routinely attempt to change lanes without looking or paying attention. Unfortunately, two objects cannot occupy the same space at the same time. When a car hits a motorcycle while changing lanes, it’s the rider, not the driver who loses every time.

At highway speeds, that can easily be deadly even if a rider is wearing proper gear. On a crowded highway, it’s even more dangerous. Not all drivers signal their intentions before changing lanes, but most do. Paying attention to which cars are beginning to drift over can help you spot a dangerous lane change before it happens.

8. Other drivers behind you 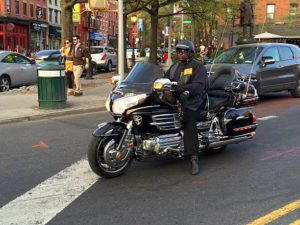 Riding through an intersection is dangerous, but so is being stopped at one. Drivers who aren’t paying attention have a habit of rear-ending other vehicles, and in most cases, it’s unfortunate, but at least cars have crumple zones and seatbelts. When a distracted driver rear-ends a motorcycle, there isn’t much to protect the rider even in a low-speed crash.

Even when you’re not stopped at an intersection, other drivers can still be a threat. Slow-moving traffic may even be more dangerous than stopped traffic. Vehicles are bunched much more closely in that kind of situation, and all it takes is a driver getting distracted for a second to knock a rider off her bike and into traffic. 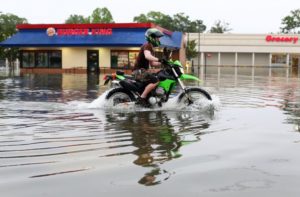 Riding a motorcycle in rain is pretty miserable. You usually get soaked, other drivers splash water on you, and the large puddles that collect at the bottom of hills may as well be rivers that you have to drive through. The roads get slicker, visibility is reduced, and drivers rarely adjust their speed, making the road a dangerous place for motorcycle riders.

There’s also a reason for riding in winter is not advised. Yes, proper equipment can keep you warm, but snow and ice are about as dangerous as it gets. Even if you’re not riding in an area with snow on the ground, you still need to be careful on long rides, because you never know what could be down the road a few hundred miles. 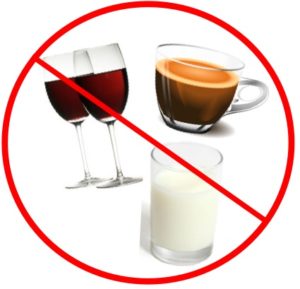 Unlike cars, motorcycles offer riders the illusion that they’re safe to ride even while intoxicated. At speed, they’re self-stabilizing, and with so much room in the lane, a little swerving seems like it will probably go unnoticed by law enforcement. Mix that with the drinking culture that surrounds motorcycles, and you have a recipe for trouble.

No matter how safe it feels at the time, alcohol slows your reaction time, impairs your judgment, and is a factor in an unnecessarily-large number of wrecks. Simply not drinking and riding reduces your risk of wrecking drastically. Don’t be your own worst enemy. Only ride sober.

Let AMERiders keep you up to date with The Biggest Risks to Motorcyclists on the Road to Watch out For.