Again, AMERiders is bringing you more information about Bike Week 2017 in Daytona, Florida days before it starts to happen. This Saturday there will tons of people gathering in Daytona Beach for the fun and love of all things bikes. Today we are bringing you the History of Bike Week and a bit more so settle in for the ride. 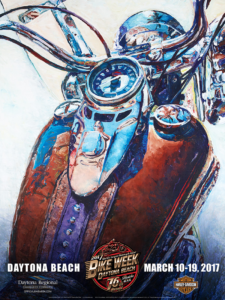 In January of this Year, the Official Poster of Bike Week was revealed an original painting by the Milwaukee-based gas-and-oil artist Mathew Hintz has been selected as the key image on the Daytona Regional Chamber of Commerce 2017 Bike Week Poster.

This is the 3rd consecutive year that Mathew Hintz’s work has been featured on the official bike week commemorative poster, he has also been named the official artist of Daytona Bike Week. Created in his distinctive layered-paint style, the painting depicts a classic motorcycle fuel tank with a Florida palm tree reflected in the chrome gas cap. Copies of the poster are free and available while supplies last at the Daytona Bike Week Welcome Center on Beach Street, and at select area businesses.  Read more about this Poster and Hintz here. 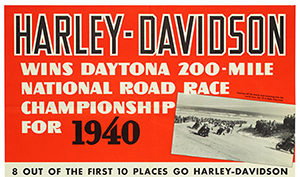 Perhaps it was the appeal of hard sand, warm winter days and the excitement of that first motorcycle race on the beach, that made Daytona Beach the home of Bike Week. Maybe it was the spirited activities surrounding the event that have kept people keep coming back. Whatever the case, Bike Week has been a tradition since January 24, 1937 – the inaugural running of the Daytona 200. 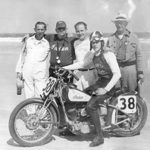 In 1937, the race course ran approximately one and a half miles north on the beach; through a 1/4 mile turn where the sand was banked, and then onto the paved, public roadway portion for the trip south. Coming back on the final turn, another high sand bank awaited riders as they raced on the hard sands of the beach. Interestingly enough, starting times for these events were dictated by the local tide tables. The races continued from 1937 to 1941. In the early years, the Daytona 200 was also called the “Handlebar Derby” by local racing scribes.

Harley-Davidson has and continues to be a huge part of Bike Week in Daytona Beach. In 1940, Harley-Davidson not only won the Daytona 200 mile road race Championship, but 8 of the top ten were won by Harley-Davidson…. read more about the history here

What to Pack for the trip!

Packing for a road trip is never easy especially for a motorcycle trip, Harley-Davidson has made that a bit easier with an online checklist for you that can be located here. It can be very useful especially when packing for Bike Week 2017.

What are Vendors gonna be at Bike Week 2017?

There are always a good many vendors at Bike week from leather to bike accessory vendors we found a list of some of the vendors that may be there this year located here.

Don’t Forget to sign up to win the bike!

Why not enter to win the 2017 Official Bike Week Motorcycle, a Customized 2010 Harley-Davidson® Ultra Class! A winner for the drawing will be selected at Approximately Noon on Saturday, March 18, 2017, at Riverfront Park on Beach Street in Daytona Beach.

Limited Entries –  4500 is the maximum amount of entries that can be sold – the odds are great. How much is it to enter? – $50 for each Official Certificate to enter the drawing. For every two tickets purchased, you get an additional entry. 2017 Official Bike Week Motorcycle – Not only is this a great bike, but it’s also A ONE OF A KIND BIKE.

Wondering how to enter and to get more information … Enter Here 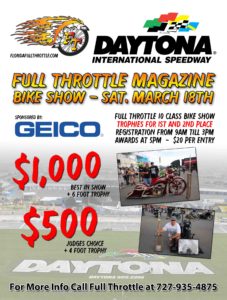 If you are wondering what other great things are going to be going on during Bike Week 2017, then take a look at the official calendar here. It is constantly updating so you may want to bookmark it for future reference, as well. The calendar boasts a few of these highlights during the week including tons of concerts and more.  Baywash Bikini Bike Wash, 2017 Bike Week Annual Bike Blessing, Free Bike Week Concert: Bob Seger Tribute, and Leather and Lace MC Bike Rodeo and Party and much much more.

One of the events happening is on March 18th is The Daytona International Speedway & Full Throttle Magazine Bike Show. Register from 9am till 3 pm with awards at 5pm. $1000 BEST IN SHOW and $500 JUDGES CHOICE along with a 6 foot trophy and 4 foot trophy! 10 classes with 1st and 2nd place awards. $20 registration sponsored by GEICO. For info call 727-935-4875 – REGISTER at the FULL THROTTLE BOOTH.

So get ready and hurry and get going to Bike Week 2017 so you don’t miss all the fun and goings on.

Let AMERiders help keep you up to date with all the information you need on Bike Week 2017.