Are You a Biker Newb? AMERiders is happy to give you some tips to let you know if you are a Biker Noob and how to prevent newbishness in the future. A motorcycle is only as good as its rider, and being a newb is something that we have all dealt with at one time or another in many aspects of our life. However, there are sometimes that riders continue to do newbish stuff without realizing they are. We wanted to provide a list to our brothers and sisters to get them in the know of the newbishness and how to prevent themselves from looking that way.

Sun’s out guns out.

When the temperature starts to rise above 65 degrees bikers love to ride, if they aren’t already. However more often than not many will drop wearing their protective gear such as Jackets, and Chaps for T-shirts and maybe even a sleeveless vest. Some will go as far as to even wear shorts, and flip flops too, thinking You’re only going 40 mph, nothing bad can happen (how wrong they are). So if you are Riding down the road, squeezing the handlebars so your triceps flex, looking around to try and catch people watching you. You might want to re-think what you’re doing. It is a bit newbish.

You choose your gear based on the motorcycle you are riding.

We all have been guilty of this at one point or another but who wouldn’t want to make sure that they wear Harley-Davidson gear with their Sweet Harley-Davidson Screaming Eagle bike? Or Indian gear with an Indian Chieftain? It just makes sense! However, dressing like a racer because you are riding a Japanese bike doesn’t make sense. Neither does wearing a full-face helmet, only while riding a Honda CBR600RR, otherwise it’s your favorite custom half helmet, no matter the riding conditions, when riding your Harley. Sure, the full-face is more comfortable and far safer, but what will people think?

You think 600cc sports bikes are for girls and new riders.

Surely, you will outgrow that puny engine as soon as you get comfortable with operating the clutch. The power is just so limiting, you actually have to be able to turn to keep up with your buddies and can’t just catch them in the next straight. Also, absolutely no one is impressed when you say it makes 125 hp.

Your style of riding is the best version of motorcycling; everyone else is doing it wrong.

Those sportbike guys dress like idiots in their onesies and their bikes look like transformers. Those Harley guys look like pirates and ride bikes that are too heavy, too loud, too chrome, and too obnoxious. Those café dudes are posers who ride uncomfortable bikes just so people will think they look like Steve McQueen. Those dirt bike dudes, in their lifted trucks, flat bill hats, and Monster-fueled blood – have to actually truck their bikes places to ride. Those adventure guys just sit on their bikes, wearing brightly colored snowsuits, while miles accumulate underneath them; those things would be miserable to ride downtown. If you think any of this while riding your own bike take a look at the pic on the left, and think to yourself  “I am a newb”.

Those of us who ride motorcycles will know exactly what I’m talking about. Those of you who don’t – Well you’re a newb, and might learn something. We are referring to that secret “wave” that oncoming bikers may or may not flash each other as they pass on the highway. Oh sure, it seems customary enough – two fellow riders politely saying “hi” to each other as they approach… but is it? Is it really that simple? Actually, it isn’t. A Rider could be sending you a very intentional message, here is how to know!

When a fellow biker is approaching, their left arm and hand will tell the story. Whether they are the initiator or the replier, the signals are the same. Following are the five main hand gestures you may encounter:

1. The Nothing – This is the “default” hand position of most cross-encounters. Simply leaving his left hand on the handlebar can mean anything from “not paying attention to the fact you’re approaching” to “I see you but I’m not interested in exchanging a greeting” – to the harsher, “I see you but since we don’t enjoy any ‘equity,’ I’m not going to acknowledge your existence.” Of course, since no words are ever exchanged to clarify, all the rider can do is simply speculate.

2. The Two-finger Flip – The most casual AND most common acknowledgment. Left hand still on the handgrip, but the index and middle fingers raised briefly. This one simply says “dude, how’s it going?” Most of the time the receiver will respond just out of courtesy. Of course the whole issue of who goes first really boils down to nothing more than a game of greeting chicken – or whoever’s in the better mood at the time.

3. The Big One – This is the granddaddy of all greetings. Left hand down off of the handlebar and out to the side. Fingers may either show a “peace” sign or be spread open palm side out. Here, the initiator is sending a clear signal that he acknowledges you. Not replying to this blatant plea for hospitality may be considered rude – and could possibly be interpreted as a strong message of inequity.

4. The Dis – Left hand down and resting on the thigh. This could be viewed as a request to treat the opposing party as a hostile witness – ESPECIALLY if it is moved there while you are approaching. Dating back to the days when rival motorcycle gangs roamed the streets, this signal indicated disrespect to the other rider(s) and was clearly meant as negative and often times led to a confrontation. Today, however, the old cultural significance has been lost, and could simply just mean your arm is tired and resting on your leg.

5. The Geek – Left hand raised high in the air as if to say, “Hi mom!” This one is specifically reserved for the new rider, who is “SO excited to be one of the gang!” Also, may be seen being used by Moped or scooter riders. Recommendation: Just don’t it definitely shows off the newb.

If you don’t rev your bike at idle, it might die. 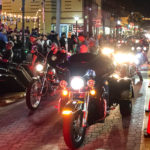 Doesn’t matter if you’re on a 600cc sportbike or a bobber, any time your bike isn’t in gear you give the throttle a few good twists just to let the world know you’re a bad ass who’d be doing 100 mph if you weren’t stuck at that light. When asked why, you mumble something about it being good for the engine, it being important to let people know you’re there for safety reasons, or that it’s just a habit and you, “don’t realize you are doing it.” However, there is no conclusive proof that it is good for the engine, and it just is annoying to most everyone.

Offended? We didn’t try too! These are just a few things that might show you might just be a Biker Newb! There are plenty more we just picked out our favorite few.

Let AMERiders help you figure out if you are a Biker Newb or not.