You guys know what’s awesome? Motorcycles. You know what else is awesome? Cartoons. It stands to reason then that cartoons about or featuring motorcycles are even more awesome. As a young nerd and budding gearheads in the 80s and early-90s, most of us here at AMERiders grew up watching, reading and playing fantastic depictions of motorcycles in our media. Those were the high days of both a cartoon as ads for toy lines and the prime time super vehicle show, and we were surrounded by futuristic motorcycles everywhere we looked. It was, in fact, a golden age.

Today—because AMERiders likes bikes and cartoons and geek arguments—We are going to outline what are, in our opinion, five of the best bikes ever captured on celluloid and one honorable mention. These are in no particular order of in best to worst just listed as the ones we liked. 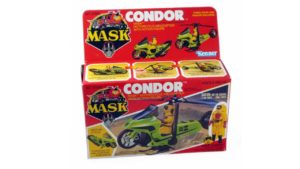 Back in the 80s, American cartoons—especially Saturday morning cartoons—were basically just thirty-minute ad spots for various toy lines by Hasbro, Kenner, et al. Transformers, G.I. Joe, He-Man—all broadcast to sell little plastic men to kids. Kids just like me. Hell, there was even a Rubik’s Cube cartoon on Saturday Mornings! One of our favorites to come out of that mess of sketchy animation and questionable writing was M.A.S.K. 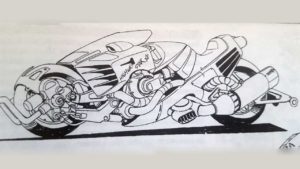 Bubblegum Crisis is one of my favorite anime series, and one of my favorite pieces of cyberpunk media – second only to William Gibson’s Sprawl Trilogy. It also has some of the raddest bike action this side of Lupin III. The series takes place in future MegaTokyo and revolves around the Knight Sabers, four mysterious vigilantes in powered suits who fight a rising tide of advanced, nearly unkillable androids called Boomers.

Yet another iconic anime bike, Kaneda’s bike is probably the least surprising entry on this list. For those of you who don’t know, Akira is a ground-breaking feature-length anime that came out in 1988. Based on a manga series of the same name, Akira takes place in a futuristic, post-apocalyptic Tokyo after an Earth-shattering psychic phenomenon triggered world war III. Our hero, so to speak, is Kaneda, a young motorcycle hoodlum who runs a bosozoku gang with his bestie Tetsuo. All these dudes and their buddies want to do is to ride their weird futuristic motorcycles around, battle other gangs, and generally have a good time. Unfortunately for them, life has a different plan for them.

Now this, this, is our favorite bike on this list. Friends, let us introduce you to the MOSPEADA Ride Armor from Genesis Climber MOSPEADA. GCM is a 25-episode anime series that ran from 1983 to 1984. It followed a band of young freedom fighters traveling through North and South America on their way to destroy Reflex Point, the base of a group of aliens that had invaded Earth and largely destroyed it. A few years after its debut, MOSPEADA was combined with two other famous anime series – Super Dimensional Fortress Macross and Super Dimensional Cavalry Southern Cross (no relation) – to create the American cartoon Robotech. Any of you who recognize this bike probably know it as the Cyclone from Robotech. Note: From here on out, even though I’m talking about MOSPEADA, I’m going to call this thing the Cyclone because we love that name. 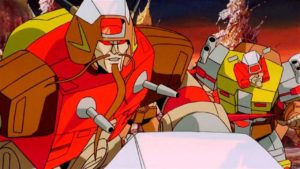 Back in 1986—before anyone had even heard of Michael Bay—Transformers the Movie hit American theaters and it was the biggest, greatest joke ever played on the American moviegoing public. Millions of nerdy kids, including yours truly, pestered their parents for months leading up to the premier to take them to the theater. We all filed in expecting 90-minutes of the usual fun, light-hearted, mildly corny weekday afternoon claptrap with a side order of the old hard sell for some new toys. 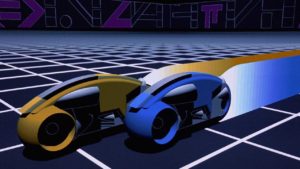 So, yeah. Tron isn’t technically a cartoon, but most of it is heavily computer animated so we’re going to give it a pass here. As you may remember, Tron is one of those early-80s movies, like The Black Cauldron and The Black Hole, that Disney made during their post-Walt attempt at being all grim and dark and adult. Unlike Black Cauldron and Black Hole though, Tron is actually good and, thirty-some years later, is considered both groundbreaking and a cast-iron classic.