It’s unfortunate, but the sad reality is that motorcycle theft takes place damn near everywhere. It is a crime that is unfortunately on the rise in the United States, with a total of 46,467 bikes stolen in 2016. That’s an increase of two percent over 2015 according to the National Insurance Crime Bureau. So, with that in mind, what can we do to avoid becoming an additional figure adding to the sum of this depressingly high number in 2017? In this article, AMERiders will discuss what products are available to aid us in our moto-security efforts, a few tips, some of the common ways bikes are stolen, and a little general info about How to Combat Motorcycle Theft.

First off, it should be known that the socioeconomic status of a neighborhood or area doesn’t make it exempt from bike thievery. Japanese sports bikes are the most commonly stolen motorcycles–especially liter bikes–though supersports (600’s) aren’t overlooked by those stealing two-wheelers. The top five most stolen makes, in order, are Honda, Yamaha, Suzuki, Kawasaki, and then Harley-Davidson. Almost 1 in 5 motorcycles that are stolen have been reported as Hondas. Most motorcycles that are stolen are broken down into parts since there’s always a demand, they’re the lightest motorcycles and thus easy to steal, they’re expensive, and above all they’re common. Bike thieves tend to steal in cities where bikes are more abundant because these same cities and surrounding areas have a market for them to sell the parts in, and obviously there are more bikes to pick from and steal. 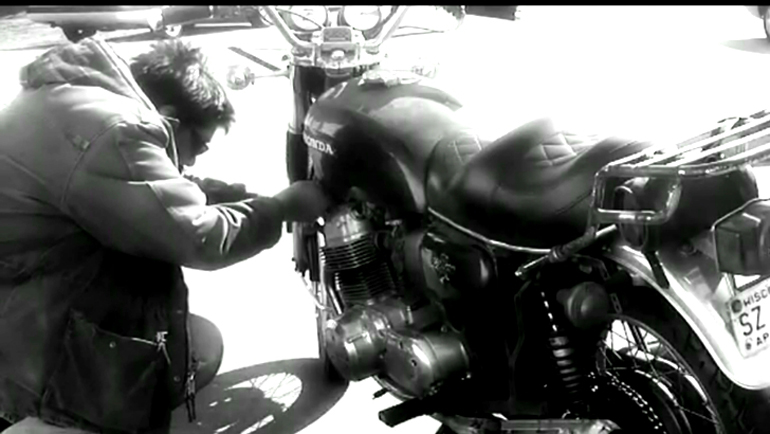 Unsurprisingly, summer is when the most motorcycle-thefts occur. July through September have twice as many thefts compared to December through February. California, Florida, and Texas experience the most motorcycle thefts, followed by North Carolina and then Indiana, with the vast majority of these thefts taking place in major cities. Stolen motorcycles are only recovered 30% of the time, half the rate that stolen cars are recovered. Motorcycle thieves aren’t opportunistic, smash and grab types. Instead, they deliberately go out hunting for a specific bike to steal–often with a parts list in mind–as opposed to just coming across a sweet motorcycle and deciding to steal it on a whim.

The main idea behind bike security is to make stealing your bike so difficult and laborious that it makes the would-be thieves move on to an easier target rather than deal with yours. Even if you have gates or a garage, chances are you will, at some point, be parked in the street. Thankfully, odds are in your favor that your bike won’t get stolen every time you park, even with a sports bike. That being said the odds are also in your favor that you won’t crash every time we swing a leg over a motorcycle, but most of us still gear up and throw on a helmet before we ride. An ounce of prevention is worth a pound of cure, after all when you are trying to Combat Motorcycle Theft. 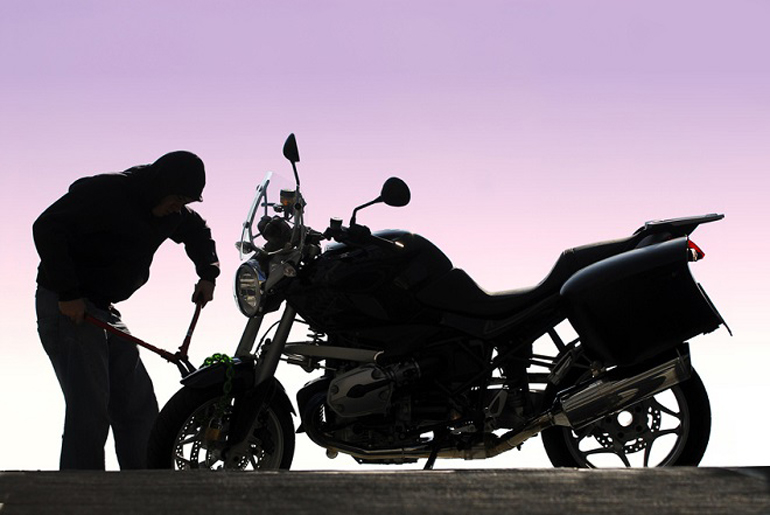 How are most bikes stolen?

So, in the interest of keeping your bike out of some thief’s hands, let’s review some common methods that are used to steal our prized possessions and, more importantly, what we can Combat Motorcycle Theft.To better grasp exactly how to protect your bike, we need to have a cursory understanding of how most motorcycles are stolen. Motorcycle thieves tend to be clever, resourceful, and driven, and their tools are portable and easy to get.

What are the tools of bike thieves trade?

Many locks can be defeated by simply wedging in a standard automobile scissor jack and turning it until the lock snaps. Bolt cutters, hacksaws, reciprocating saws, and angle grinders are all popular tools for defeating metal security products. It’s important to understand that the weakest link of your security represents the strength of your entire system. Thieves look for this weak link and that’s what they’ll attack. Going through the ignition is a common practice. Even with the steering locked thieves have bypassed this by using a small dolly that is placed under the front wheel so the locked wheel can freely roll, assuming the bike is in neutral.

Another very simple and common method is just picking up a bike, throwing it in the back of a van or truck, and driving away. This is something that’s easily and quickly done with a couple of guys and a cheap used Econoline. While it may seem foolish to load the perfect escape vehicle into a panel van, it happens all the time. Once the bike is in the van, thieves don’t have to worry about being spotted on the bike while getting away. Which makes it a popular method.

Also, it only requires half of the bikes weight to be lifted to get it into a van, lift the front wheel in, then the back wheel. Typically thieves just shove your bike in a van on its side, with no regard for slick paint job it has. There are obviously countless methods of stealing a motorcycle and new tactics are being thought up all the time. Now that we’ve reviewed the most common types of motorcycle theft, let’s review the products existing to aid us in our effort to Combat Motorcycle Theft. 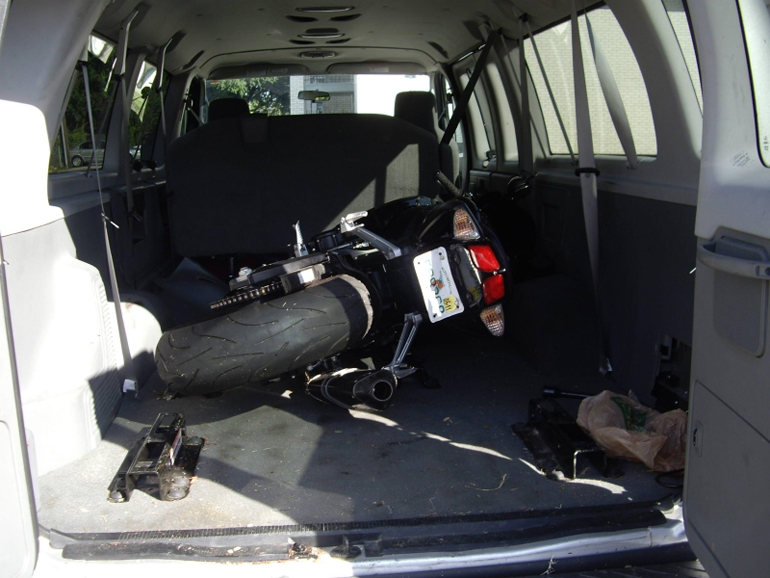 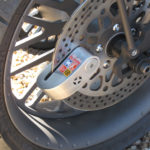 The Disc Lock: These devices work the same way a boot does on a car, however, the physical application obviously differs. Attached directly to a brake rotor, these locks prevent the bike from going anywhere as the wheel tries to rotate. Many manufacturers offer “memory cables” which attach to the rotor and then the handlebar or dash area to remind you to take the lock off before trying to ride away. As safe and easy as disc locks are, a lot of guys have screwed up their front ends and been thrown over their bars because they forgot to remove theirs before taking off. 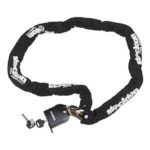 The Chain Lock: These are exactly what they sound like, heavy chains that are often encased in a rubber or nylon sleeve to prevent it from scratching your bike. These can be run through a rim, offering the “boot effect” the disc lock has, but they are also great for chaining your bike to immovable objects. 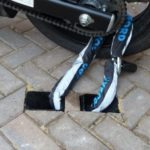 The Anchor: These are devices that anchor to the ground, giving your motorcycle something to be chained to when a nearby immobile object isn’t an option. Many riders install these outside their house or apartment, or at their place of employment. When installed correctly, and used in combination with a good chain or cable lock, anchors offer incredible protection. How the anchor is fixed to the ground matters, though. A single bolt is okay, but the depth of the pavement often means a 3-inch bolt does the same job as a 6-inch bolt. Ideally, you want multiple shorter bolts instead of one longer one. 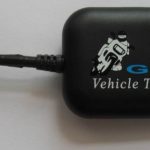 The Tracker: GPS tracking devices are fantastic recent additions to our arsenal of security options. Despite trackers being much better at solving the theft than preventing it, they still give you some recourse when your bike is lifted. Some tracking devices can even send push-notifications if your bike moves, and they have the added bonus of greatly improving your chances of bringing the guy who stole your bike to justice. Some expensive trackers also require service fees. There are some that can be picked up at best buy for $30 such as the  “Bravo” made by “TrackR”,  and the device itself is the size of a quarter and can be hidden anywhere on the bike. 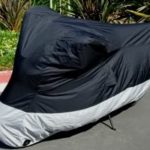 The Cover: In addition to protecting your bike from the elements, which is a plus, covers also serve another interesting purpose. When your bike is covered it makes it really difficult to know what’s underneath. Clearly, covers can be bypassed with nothing more than a sharp blade, but thieves are lazy and often take the path of least resistance, going with the bike up the street that they could right away identify. Covers also have the added bonus of keeping curious passersby from sitting on your bike. 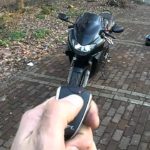 The Alarm: All kinds of bike alarms exist to help Combat Motorcycle Theft. Proximity alarms, vibration alarms, wheel-movement alarms, etc. Just choose the one that is right for you.

Here are some highly rated anti-theft products currently on the market.

Kryptonite has its “Stronghold Anchor” which is mounted via multiple bolts and even comes with the masonry drill bits. It also includes some ball bearing caps that can be used to strip the hex/bolthead so thieves cant just unscrew your anchor. The actual anchor loop folds down so it’s closer to flush with the ground, and said loop is beyond solid. Oxford makes my favorite disk locks. The Oxford Boss Alarm Disc Lock is not only a quality disc lock that doubles as a chain lock but as its name suggests it has a built-in alarm.

Abus is a company that produces some of the finest security products on the market, and though they don’t come cheap you do get what you pay for. The Abus Granit Extreme Plus 59 Chain Lock is one of the most high-tech and secure locks out there. Abus also has a Steel-O-Chain 880 Lock that makes for a great helmet lock for full face helmets too. For those on a budget, Schlage makes a decent chain that sells for just under $35. 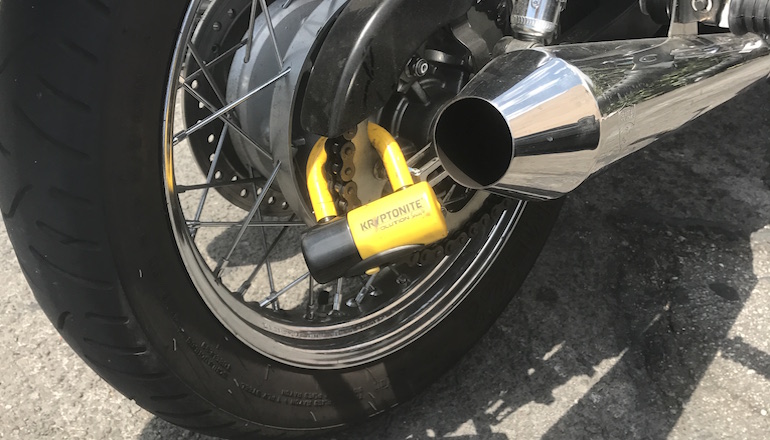 Your motorcycle(s) is/are probably unlike any other tangible object you own. The personal and sentimental attachment we have to our motorcycles make them really special things that are worth protecting. For many of us, riding makes up part of our identity and who we are so there’s something particularly insulting and anger-inducing when our two-wheeled pride and joy is targeted, so doing what we can to Combat Motorcycle Theft is something we all should want to do.

Let AMERiders keep you up to date with information on How to Combat Motorcycle Theft.