History of the Confederate Flag

If you didn’t, your interest in the war likely brought you into contact with people who have a strong emotional connection with the flag. And, at some point in your life, you became aware that not everyone shared your perception of the Confederate flag. If you weren’t aware of this before, the unprecedented flurry of events and of public reaction to them that occurred in June 2015 have raised obvious questions that all students of Civil War history must confront: Why do people have such different and often conflicting perceptions of what the Confederate flag means, and how did those different meanings evolve? 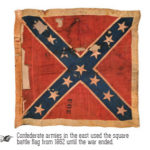 The flag as we know it was born not as a symbol, but as a very practical banner. The commanders of the Confederate army in Virginia (then known at the Army of the Potomac) sought a distinctive emblem as an alternative to the Confederacy’s first national flag—the Stars and Bars—to serve as a battle flag.

The Stars and Bars

The Stars and Bars, which the Confederate Congress had adopted in March 1861 because it resembled the once-beloved Stars and Stripes, proved impractical and even dangerous on the battlefield because of that resemblance. (That problem was what compelled Confederate commanders to design and employ the vast array of other battle flags used among Confederate forces throughout the war.)Battle flags become totems for the men who serve under them, for their esprit de corps, for their sacrifices. They assume emotional significance for soldiers’ families and their descendants. Anyone today hoping to understand why so many Americans consider the flag an object of veneration must understand its status as a memorial to the Confederate soldier.

It is, however, impossible to carve out a kind of symbolic safe zone for the Confederate battle flag as the flag of the soldier because it did not remain exclusively the flag of the soldier. By the act of the Confederate government, the battle flag’s meaning is inextricably intertwined with the Confederacy itself and, thus, with the issues of slavery and states’ rights—over which readers of Civil War Times and the American public as a whole engage in spirited and endless debate. 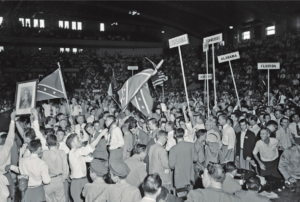 When the civil rights movement gathered force, especially in the wake of the U.S. Supreme Court’s 1954 Brown v. Board of Education decision, defenders of segregation increasingly employed the use of the battle flag as a symbol of their cause. Most damaging to the flag’s reputation was its use in the hands of the Ku Klux Klan. Although founded by Confederate veterans almost immediately after the Civil War, the KKK did not use the Confederate flag widely or at all in its ritual in the 1860s and 1870s or during its rebirth and nationwide popularity from 1915 to the late 1920s. Only with a second rebirth in the late 1930s and 1940s did the battle flag take hold in the Klan.

How the flag became the symbol of Rebellion

When the dam burst on Confederate flag material culture and heritage groups lost control of the flag, it acquired a new identity as a symbol of “rebellion” divorced from the historical context of the Confederacy. Truckers, motorcycle riders and “good ol’ boys” (most famously depicted in the popular television show The Dukes of Hazzard) gave the flag a new meaning that transcends the South and even the United States. Calling themselves “REBELS”

Many believe that it should be displayed within its historical context, such as at museums, reenactments, living histories, etc. and some also believe, it is appropriate to own one if you are an avid historian and lover of the time period, but people should take care to remember and be sensitive about what it can symbolize to others. 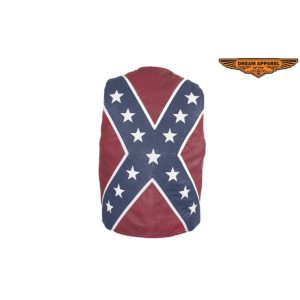 Bikers wear their proud rebel patches as symbols of what they are, it is just our way. We understand and know the history of the flag whether it be the true history or what others would have us believe. (Some just used the selective parts they want to use to make their own points).

At AMERiders we offer many different ways to show your Rebel side from patches, to boot gear to protective gear and more. Like this Men’s Lambskin Leather Vest with Rebel Flag that’s fitted with two large slip pockets inside and two roomy stash pockets on the waist for any personal items, you’d care to carry. With a soft black lining and button snap closure, your comforts guaranteed and it is finished with stylish pleating on the front. This incredible vest won’t last long so order now.

Let AMERiders tell you How the Confederate Flag became the symbol of Rebellion.