AMERiders says “Don’t Miss Daytona Bike Week 2017 Which Starts Today! Go Have Some Fun!”  We will be giving you a bit of what is going on during the week so keep an eye on our Facebook page as we may post extra tidbits or two for you to keep up with and don’t forget to give us a like and maybe a share or two. Now let’s get on to the good stuff, what will happen the next few days of Bike week.

What is Daytona Bike Week?

Let’s remind those of you newbie bike riders that don’t know, Daytona Bike Week is a motorcycle event and rally held annually in Daytona Beach, Florida. Approximately 500,000+/- people make their way to the rally area for the 10-day event every year. The festivities include motorcycle racing, concerts, parties, and street festivals. The event is usually held on the first full week of March and contends with the Sturgis Motorcycle Rally as the most popular motorcycle rally in the United States.

Heard of Burning Man What about Burning Bike? 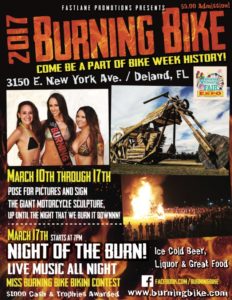 Here is a great reason that you Don’t want to Miss Daytona Bike Week 2017! Daytona Bike weeks newest Signature Event: Burning Bike. This year’s biggest and hottest party will take place at the Volusia County Fairgrounds Fri March 17th at 7 pm. The 2 rounds of the Miss Burning Bike Bikini contest followed by live music from the White Buffalo Band & Joe Reid & the Heart land band. This will be an event like no other, that you will never forget… The 50 ft high wooden bike will create massive flames that can be seen for miles. Guest all week long can sign and pose for pictures beside the huge wooden sculpture before we burn it down. There will be 2 stages, cold beer, mixed drinks & great food. The party starts Friday, March 17th @ 7 pm $5 admission. Sponsored by 911bikerlaw. 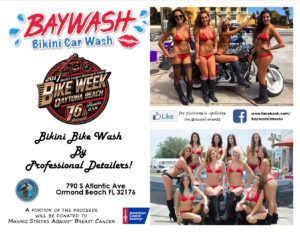 The amazing Baywash Babes are back for another Bike Week bikini bike wash!!! They offer motorcycle detailing by trained professionals. Come see why They’re the best in the business! They will be at Dimitri’s Pelican Landing which is located at 790 S Atlantic Ave, Ormond Beach! A portion of the proceeds will be donated to Making Strides Against Breast Cancer of the American Cancer Society. Want your Bike washed and detailed by some hotties go see the Baywash Babes! 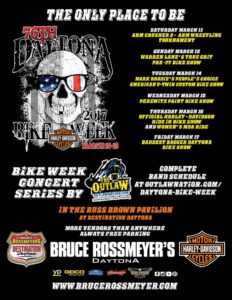 Plus an Arm Wrestling Tournament, hundreds of vendors on-site, full bars, restaurants, daily entertainment and live music throughout the property including The Bike Week Southern Revival Concert Series by Outlaw Nation.
For a complete list of our concerts visit their website.

Don’t forget you can Win a Bike

Another reason that you Don’t want to Miss Daytona Bike Week 2017Why not enter to win the 2017 Official Bike Week Motorcycle, a Customized 2010 Harley-Davidson® Ultra Class! A winner for the drawing will be selected at Approximately Noon on Saturday, March 18, 2017, at Riverfront Park on Beach Street in Daytona Beach.

Limited Entries –  4500 is the maximum amount of entries that can be sold – the odds are great. How much is it to enter? – $50 for each Official Certificate to enter the drawing. For every two tickets purchased, you get an additional entry. 2017 Official Bike Week Motorcycle – Not only is this a great bike, but it’s also A ONE OF A KIND BIKE.

Wondering how to enter and to get more information … Enter Here

If you are wondering what other great things are going to be going on during the 76th Annual Daytona Bike Week, then take a look at the official calendar here. It is constantly updating so you may want to bookmark it for future reference, as well. The calendar boasts a few of these highlights during the week including tons of concerts and more.  Baywash Bikini Bike Wash, 2017 Bike Week Annual Bike Blessing, Free Bike Week Concert: Bob Seger Tribute, and Leather and Lace MC Bike Rodeo and Party and much much more.

Also, keep up to date with their Facebookpage for Bike week here