Stuck cables, false idles, ignition failure, valve issues, fuel issues, and more – find out how to stay on top of them. Regular issues can be easy to address with a little know-how So, we’re well through riding season at this point, and some of you may have developed some niggling little problems with your bikes that, while minor, suck all the fun out of an afternoon’s ride. That’s why we at AMERiders have decided to give you a bit of information on Fixing Some Common Issues on an Older Motorcycle.

No matter if you have EFI or carbs, a Harley-Davidson or a Honda, here is a list of five common problems and triage steps you can take to diagnose the nature of a mechanical issue for an older motorcycle. Even if you can’t fix it, you don’t have to blindly trust your hard-earned cash to the honesty of the nearest “reputable” mechanic. Get your toolbox out: it’s time to lift the tank!

For many of us, the only issues we’ll ever have with an older motorcycle are of our own making. Up until very recently, most motorcycles have had at least two cables that can go bad and cause headaches: the throttle, and clutch cables.

The throttle cable normally lets you know it’s going bad by refusing to snap back the throttle grip when it is turned and released. Never ride such a bike – they call that a “suicide throttle” for a reason. It’s also a wise idea to get in the habit of checking now and again to see that your throttle isn’t affected when you turn the handlebars completely from side to side.

The clutch cable is far sneakier and creeps into your perception as perceived clutch slippage. What really happens is that it moves less and less inside the sheath and eventually the cable and sheath as a whole start to fuse into one nasty mass that overpowers the return spring. This doesn’t allow the clutch to release all the way and causes it to slip.

The three main causes of cable woes are wrong routing – it’s too short after changing handlebars or crashing and, most often, not properly maintained.  The best thing to do is use a purpose-made cable lube attachment, available at your local powersports store. Still, in a real pinch, a cable that has recently stuck can, most times, be salvaged by:

I’ve even seen people create makeshift funnels out of Silly Putty and soak the cable overnight in liquid wrench on the way to Sturgis with OK results. Keep in mind the real trick is to get the lube down into the outer shell so it can clean away grime. If all else fails you can try riding without the clutch. (we’ll cover how to do this on Friday of next week.)

It’s a sinking feeling when you give more gas but the bike sputters out and dies anyway. Naturally, the first thing you want to do is get safely out of the roadway. Then check you didn’t accidentally hit the kill switch. Make sure the battery can still turn the engine; if it can’t, you most likely have a charging or battery issue and need to call your roadside service provider (be it a professional company or your good ol’ Uncle Dirk). If the battery is OK, these are the steps to take: 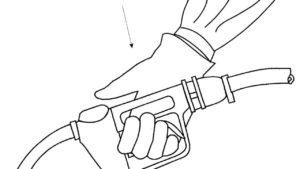 First, make sure there is gas in the tank and the petcock is set to On, Reserve, or Prime. Riders with more modern motorcycles instead of an older motorcycle will have no idea what a petcock is, but it’s worth making sure your bike isn’t equipped with such a thing. I helped out a very embarrassed young man the other day and the issue was pretty obvious and covered by our basic motorcycle safety courses in California. It helps if it’s set to “ON.”

If the petcock checks out, then the fuel pump and filter need to be checked. Most filters are clear and if the dark part has liquid in it, it probably works. Pumps can be tested by putting a finger on them and clicking the ignition from off to on. You should feel the pump “click” as it primes. If there is no click, check the fuses. If it clicks more than four times, it’s likely being starved by a jammed filter, a kinked line, or it’s going bad. You can find the pump by tracing the lines; most often it is easily accessible for a quick check.

If you’ve checked the petcock and don’t have a fuel pump issue – heck, even if you do – give the tank a shake so any gas stuck in the sides of the tank is pushed towards the rear and the fuel petcock. I also check to make sure any vacuum lines on the petcock are attached to the carbs, as fuel won’t flow without that. You have to actually look.

On newer, emissions-controlled motorcycles, I see a lot of cases where the bike runs out of power and stalls. Once pulled over, they restart OK, then stall again 3 miles later. In these cases, try running with the gas cap open! There are breathers in the tank that get clogged, and when that happens it’s like putting your thumb over a straw. The gas can’t flow out.

Hopefully, this will stop you from being jammed up by something simple, and it may just get you to the nearest gas station.

If your older motorcycle isn’t idling right, warm it up and take note whether adding choke (making the mix richer) or cracking the throttle ever so slightly (making leaner) makes the bike change behavior. Again, if you ride a modern motorcycle instead of an older motorcycle you’ll have no idea what a choke is, but even Electronically Fuel Injected motorcycles reveal a lot by “blipping” the throttle. Rich bikes are getting too much gas, so they idle high but lose power when given initial throttle because they can’t burn all the gas. For carburetors that suddenly show signs of being in a rich condition, gently whacking the bottom of the carbs to make sure the floats (tiny little pieces that control gas flow like the rubber piece in the back of your toilet) are free. Also, check that the choke cable works. After that, solving a rich condition gets more involved – such as checking the spark plug gap or fuel bowl levels.

Lean running engines tend to “hang up” at high rpms when the throttle is let go, and they also rev down slowly after the throttle is closed. A key clue is that the issue gets better as the bike warms up. Extremely lean motors can also stall out completely when given some light throttle. Another sign of lean running is the “hunting idle” where the motorcycle revs up randomly, changes RPMs, or takes forever to come down to idle.

First, start simple and look for a loose or open vacuum hose. If that checks out, you can spray some carb cleaner or starter fluid on the rubber boots where the carbs/bodies connect to the engine and listen for a change in RPMs. Lastly, confirm that the fuel is being supplied like it is supposed to be by checking everything in the “Running on Empty” section above. If it is, lean running is the No. 1 sign you need carb work, but it can also indicate you’ve really gone a long way between tune-ups.

For EFI, much of the old-fashioned carburetor malarky is done away with. Just be sure the pressure sensor on the airbox is connected right and has a vacuum, and that nothing is unplugged.

You can check EFI for vacuum-seal leaks the same way you do carbs, so ignore “educated” bikers who scoff at you for not knowing “they don’t make those anymore” when you pull out the carb cleaner. EFI bikes also all have a handy “self-diagnostic mode” which will flash out a numeric code through the gauges. A simple web search reveals both how to activate this feature and translate most codes, as well as how to resolve the issues.

We are cutting this article in half as we don’t want you reading all day about how to fix your older motorcycle we’ll take this back up on Wed. of next week, and you can go have a nice ride today.

Let AMERiders keep you up to date with information on Fixing Some Common Issues on an Older Motorcycle.