Discovery Channel and Harley-Davidson Partner up About Harley’s History. A Harley-Davidson is more than a motorcycle. It is a symbol of Americana. We at AMERiders want to give you a bit of information about the show that is to air starting Monday, September 5th continuing to September 7th. Th2-hourur installments and will tell the story of the birth of the iconic Harley-Davidson brand that launched in 1903 by two friends from Milwaukee, William Harley, and Arthur Davidson.

Here’s an exclusive first look at the miniseries, which offers a harrowing look at an old-school motorcycle race:

Who will be starring in the show?

Harley and the Davidsons will star Actor Gabe Luna in the role of Eddie Hasha, nicknamed the “Texas Cyclone,” a notable American motorcycle racer. Luna is known for his roles as El Rey Network’s “Matador.” , ABC’s “Wicked City,” and a recurring character in HBO’s “True Detective.” Luna has appeared in multiple films, including Richard Linklater’s “Bernie” and starred in “Transpecos,” which premiered at the 2016 SXSW Film Festival.

Alex Shaffer has been cast as Shrimp Burns, one of the top dirt and board track motorcycle racers in the early 20th century. Shaffer is known for many film roles with his feature film debut opposite Paul Giamatti in “Win Win,” which premiered at both Sundance and SXSW Film Festivals. Also starred in “The Lifeguard” opposite Kristen Bell and the 2015 film “We Are Your Friends” featuring Zac Efron.

Playing the role of Walt, Jr. is Sean Scully who has appeared in several TV and film projects.

What will the story do? 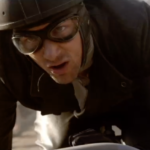 With this all-star cast, the series will take America back to Milwaukee during the early 1900’s an era of innovation. Where young William S. Harley and Arthur Davidson engineered the motorcycles and later the company. During a time of great social and technological change the series tells an epic story of crashes, family feuds, and American legends.

Challenges of the Series

The Production team had a challenge when helping to tell Harley’s History. They built working bikes from scratch based on Bill Harleys’ original drawings. “Michiel Huisman who plays Walter Davidson commented,” It was one of the coolest and best parts of this shoot to ride these amazing bikes.”

We at AMERiders love knowing how our bikes were engineered and how they came into being and plan on watching this when it premiers. We hope you will as well.
And as always….