Did You Know How Harley-Davidson Bikes Became Known As “Hogs”? AMERiders gives you the backstory and the answer to this question. For nearly 100 years, Harley-Davidson motorcycles have been referred to as “hogs.”  Although you may assume that this nickname has something to do with the size or sound of their motorcycles (or perhaps the size or sound of their riders), the true origins of the nickname are rooted in racing.

Harley-Davidson fielded its first factory race team in 1914 at the Dodge City 300.  Although they were not victorious in their inaugural race, losing to archrival Indian, the five-man team came back to win at Dodge City in 1915 and 1916. In the years leading up to World War I, Harley riders dominated the sport of motorcycle racing, racking up first-place finishes across the United States earning the team the nickname “The Wrecking Crew.” (Which, ironically, is the same nickname that a group of Indian riders would pick up a few decades later) 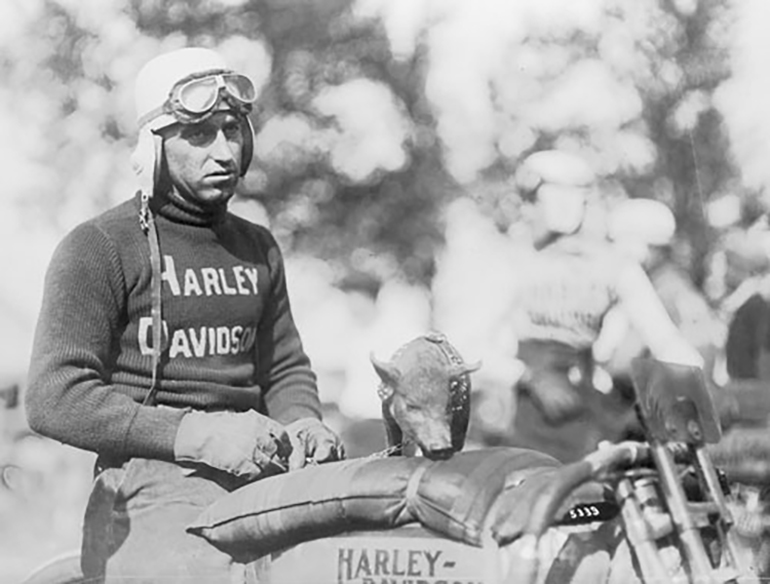 All racing was postponed during WWI, with much of the motorcycle production going to military contracts, but once the war was over it was back to the track for the Wrecking Crew. They continued to come out on top, taking the checkered flag at board tracks and dirt tracks throughout the early 1920s. It was during this time that race team member Ray Weishaar acquired a pet piglet, which was quickly adopted as the team’s mascot. A tradition soon began of riding a victory lap after each win with the pig, whose name was Johnny, sitting on the gas tank of the winning race bike. 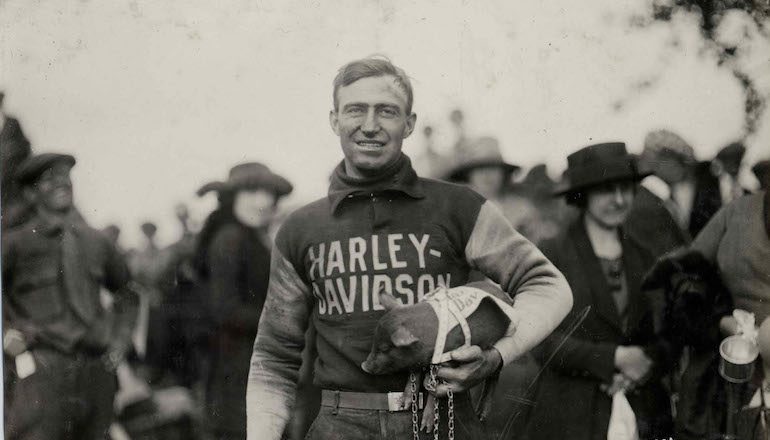 Thus the Knickname “Hogs” was born

This practice led to various journalists calling the racers “the Harley Hogs” as well as remarks that Harley was “hogging” all the victories from Indian and Excelsior. Eventually, the term “hog” became synonymous with any Harley-Davidson motorcycle. As the years went by, the company embraced the moniker and now “HOG” is used as an acronym for the Harley Owners Group as well as the Harley-Davidson Motor Company’s listing on the stock market. Harley’s marketing and art departments have also done their part to perpetuate the “hog” nickname, producing various ad campaigns and merchandise that feature images of hogs. The current artistic rendition of the hog looks nothing like old Johnny, but I guess no one would want to buy a motorcycle named after a cute little piglet.