AMERiders hates labels, well unless it is our brand sitting on clothing or your motorcycle gear then it’s ok AMERiders hates labels almost as much as the narrow-minded, immature, and irrational logic that gives birth to them. We don’t necessarily hate the people who use labels, mind you – some of them are good folks who just have a different opinion than ours – but we absolutely detest labels. We know that we are gonna upset some of you guys and gals with this post, but ya know what? We’re sorry, it’s what we believe, and if you don’t, give us your opinion in the comments and we will respond to you with an intelligent conversation.

What labels are we talking about?

For example, the biker-related labels of “poser,” “RUB,” and “real biker.” The first two are usually used as a derogatory term applied by members of the last term when describing someone who rides a bike and doesn’t fit their self-styled idea of just what a “real biker” should be.

Kinda stupid isn’t it? We think so to.

For clarity’s sake, “RUB” stands for Rich Urban Biker. This term is most often used by “real bikers” to describe people who are “rich” (which means they have more money than the “real biker” does), buy a bike, and ride it only on weekends. Never mind the fact that maybe the so-called “RUB” has a full-time job which prohibits him/her from riding anytime other than on a weekend; that line of thought involves common sense and logic, and that just doesn’t work here.

And we won’t even try to define “poser.” The variations of that term are so broad and numerous as to defy description. But some of the examples that we’ve heard are as follows:

Which leads us to the obvious question: Just what is a “real biker?” 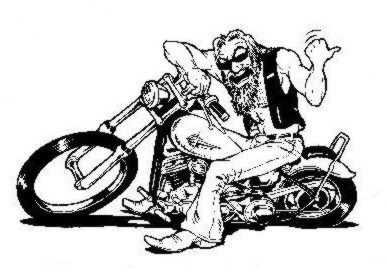 See how ridiculous this can all get?

You might as well say if your nickname isn’t lefty your not a real biker well that leaves out about 90 percent of the bikers we personally know. But really what is a real biker? In our opinion, if you own a bike and enjoy riding it then you’re a real biker. If you take care of it, you’re a real biker. You don’t have to say puts on gruff voice (hmph I’m a biker and I ride my bike yadda yadda). Most bikers won’t declare they are a biker.

Let AMERiders help you elimintate the use of labels and just RIDE!!!!!.