As Sturgis winds down this weekend There have been a great many things that have gone on this during the rally this week, and we here at AMERiders have dug up a few that we thought might interest you. From the 78th Logo Unveiling to a Tattooed Bike and more. Plus we will give you a run down of the last days of Sturgis and what is happening. 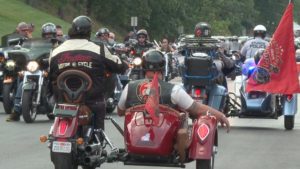 Dozens of veterans finished their multi state motorcycle ride honoring our nations wounded warriors in Sturgis Saturday, August 5th. A 9-day and over a thousand miles this Veteran’s Charity Ride is this journey. Although bikers in the crowd may have looked like an ordinary group of bikers at the rally, some of the vets were on modified bikes. Organizers of the ralley wanted to be sure to leave no veteran out, even if they had been injured in combat.

Veteran, Josh Stein is one biker that participated in the charity ride. “Life after the military still continues, you have to find that passion,” said Stein. “For us it was motorcycles. It gets us out of the house; we get to explore the country on the back of a motor cycle.”

The ride started in Los Angeles and ended at the Sturgis rally. Stein said it’s great to see what he has fought and bled for.

Mayor Mark Carstensen, along with City Manager Daniel Ainslie and numerous SMRi board members, unveiled the 78th official logo of the Sturgis® Motorcycle Rally™ on historic Main Street in downtown Sturgis Wednesday, August 9th, 2017. It has a familiar look, with the black background and reddish numbers. The logo is designed by a group of artists almost 15 to 20 months in advance. 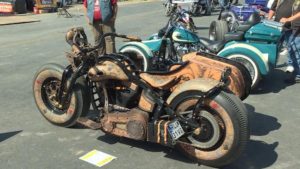 Krzysztof Bienkiewicz from Game Over Cycles in Poland says, “We brought with us the world’s first tattooed motorcycle. The bike was built in 2014, but actually only two weeks ago, we finished the side kart to it. Both of the vehicles are fully tattooed, the side cart both inside and outside. The bike is inspired by the art of body adornment, tattooing in this case. So it’s actually covered in leather, and the leather is actually tattooed by three Polish tattoo artists.” Bienkiewicz says it took 3,000 hours of work to build the bike and it has 2,500 hours in tattooing put into it.”

If you’re looking for more events and what to do during the Last Days of Sturgis here are a few ideas.

As You are heading home please be safe.

Let AMERiders keep you up to date with information on the Last days of the Sturgis Motorcycle Rally.