AMERiders hopes that you have gotten all your gift shopping done for those that were on your list to shop for. We believe we have, Did you remember to ask Santa for that new bike or set of saddlebags? We sure did, doesn’t mean we will get them but we asked anyway. We hoped we’ve been good boys and girls, and that he doesn’t put coal in our stockings. As we did last year we decided to post Twas the Night Before Christmas Biker Style  I would like to note again, I did not write this it was written by someone else, nor I couldn’t find a name on attached to it. 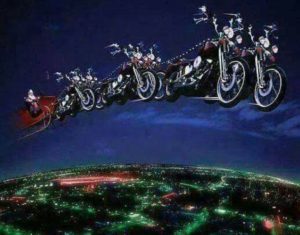 ‘Twas the night before Christmas, And not until Spring,
Would an engine be running, not even a Wing.
The bikes are all sleeping, They’re covered and warm
Batteries are tended, nylon covers their form.

My Bros were all nestled snug in their beds,
While visions of new chrome danced in their heads.
And I in my doo-rag, bike jacket, and boots,
Out shoveling snow, and dreaming of scoots.

Then from the horizon, there came such a clatter,
My shovel I dropped, what could be the matter?
Away up the hill, I slogged through the snow,
Looked up at the sky; where’d all that noise go?

A throb from the heavens like straight pipes so hearty,
Gave Summers’ good thoughts, a loud bikers’ party.
When what to my wondering eyes should appear,
But a Hog Ultra Classic, Red trailer in rear.

With a little old rider, so lively and quick,
I knew in a moment it must be St. Nick.
More rapid than Crotchies his Ultra came on,
And he whistled, and shouted, and sang out this song;

As small bikes that from the semis do fly,
When they meet with the air blast, mount to the sky.
So up to the house-top that Ultra it flew,
With a trailer of goodies, and ole’ St. Nick too.

And then, in a twinkling, I heard on the roof,
The rumble and thunder of pipes that gave proof.
I ran to the house, boots thumping around,
And in came St. Nick all bearded and round.

Dressed all in black leather, from do-rag to boot,
His chaps were all tarnished with road grime and soot.
A T-bag of goodies he’d flung on his back,
And he looked like a peddler just opening his pack.

His shades — how they twinkled! his do-rag how scary!
With chains intertwined, through skulls that were cherry!
His droll little mouth had done many a row,
So the beard of his chin was as white as the snow.

The stump of a pipe he held tight in his teeth,
The smoke had a strange smell; it gave him relief!
He had a broad face and a large fat beer belly,
That shook when he laughed like a bowlful of jelly.

He was tattooed and plump, a right jolly old rider,
So I offered a cold Bud, thought what could be righter?
A wink of his eye as he downed that cold beer,
Gave me to know I had nothing to fear.

He spoke not a word, but went straight to my ride,
And fixed it with Chrome, Horsepower, and Pride!
And giving the peace sign with bikers’ good cheer,
Took off for his Ultra rumbling near.

He sprang on the saddle, his gloves on the bars,
A wheelie he threw then off towards the stars!
I heard him exclaim, as my chest swelled with pride…
Merry Christmas to all, and to all a good ride!

I love reading that poem Twas the Night Before Christmas Biker Style is better than the original one to me. AMERiders asks that you Please remember to be safe this weekend as we want to hear back from all our customers that they are safe and sound back in their beds. From their holiday rides and parties with friends and families.

Let AMERiders tell you Twas the Night Before Christmas Biker Style every year.