AMERiders knows that Symbolism is big in the Biker community which is why we wanted to delve into the history of Skulls and Wings and what they mean to Bikers. So the questions are when, where and why did skulls and wings become associated with motorcycles and why are they an important symbol to our community? We did some digging and this is what we found.

History behind Wings and Skulls and their link to Motorcycles

Skull symbolism has long been around, way back before motorcycling. It’s been seen in old paintings, referenced in ancient texts, and anthropologists have found tribes using skulls for ceremonies. The famous skull and crossbones symbol has become accepted as a universal sign of danger for deadly substances. It’s also been used to symbolize bands of pirates and pillagers.

There’s no question that the skull has come to symbolize our mortality. In art, going back hundreds of years, skulls were placed in paintings as a “memento mori.” The loose Latin translation is a “remembrance of our own death.” This refers to the warning that we all have a beginning and an end. In Roman times, slaves would shadow the returning generals as they paraded through the streets on their way to be greeted by Caesar. They would repeat to the general, “Respice post te! Hominem te memento!” (Look behind you! Remember that you are but a man!). In other words, don’t get cocky, death waits for you too.

But what about Motorcycles?

Taking a step away from the macabre and looking at the winged skull symbol, this first became prevalent on tombstones. The wings give the skull an “angelic” appearance. Placing the winged skull on the grave symbolized a life after death, where angels would transport our loved ones to a better place. Regarding angels, many squadrons in WWI and WWII named themselves “Hell’s Angels.” They marked their planes with winged skulls, perhaps in hopes of transcending death, literally out-flying the grim reaper. Some people believe the motorcycle club of the same name was started by some of these combat vets.

Motorcycle Companies and the Symbols themselves 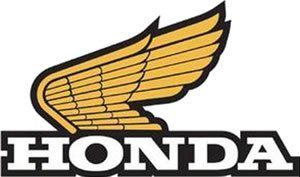 Fast forward to the 1960s, 70s, and 80s. Through cutting-edge research and development, Japanese motorcycles had pushed the limits and become the dominant breed of motorcycles. Honda was arguably the leader of the pack and Honda’s logo throughout this era was winged. Throughout the 1990s and 2000s, many Hondas came from the factory with large painted wings incorporated in the design of the motorcycles.

Today, over 50 years later, a winged logo still represents Honda’s Powersports division and manufacturers such as Harley-Davidson have invoked the skull as part of their marketing. The Willie G. Skull has many different theories on where the idea actually came from and who came up with it. But Harley is tight lipped and has not actually said anything other than something along the lines of a genius marketing idea. Their trademarked skull design is sold on shirts, motorcycle parts, and coffee cups, just to name a few products. 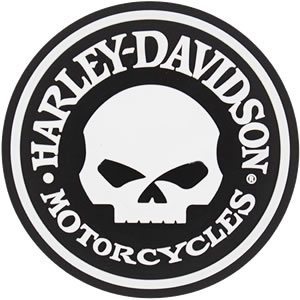 Skull symbolism in motorcycling is a bit unlike that in other walks of life. That is, when we ride our bikes, we don’t intend to die, nor do we intend anyone else to die. Yet, it’s a symbol so common with motorcycle riders. Why do motorcyclists adorn themselves and their bikes with skull patches, skull stickers, skull jewelry, and skull accessories, if our goal is to ride safely?

As much as we all strive to be safe on our motorcycles, it seems ironic that skull symbolism is so dominant in motorcycling.

But motorcycle riders are not looking to ransack towns or invoke some god of war. We’re really just looking to enjoy our bikes and have a good time with friends. We want to be safe on the road and don’t wish any of our fellow riders to die. So why do we hold a symbol of death so close to us?

What we do know is that Skull symbolism expresses the bikers commitment until death, to motorcycling, to their club, and to their brothers and sisters. It’s also how we carry with us all others who came before us.

Let AMERiders help you find your symbolism with our skulls and wings items.