With 6 and a half days left to the Sturgis 77th Anniversary Motorcycle Rally, we at AMERiders are continuing to dig up some more information for you on what is happening. From Racing to Coins and Museums and things in between there is lots more to inform you about.

FLAT TRACK IS THE REAL THING 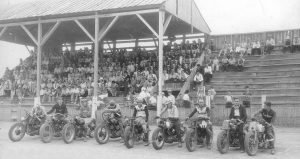 The Pappy Hoel Speed Classic presented by Russ Brown returns to the same historic dirt track where it all began back in 1938. And just like the first flat track race organized by the local motorcycle dealer and area business, the Speed Classic roars back into downtown Sturgis backed by Coca-Cola and area convenience and grocery stores. Stop by Rapid City and Black Hills area stores for a chance to win a Family Fun 4-Pack of 4 VIP passes for the Speed Classic and other prizes.

Set for August 3-5, 2017 at the Meade County Fairgrounds in Sturgis, The Russ Brown Pappy Hoel Speed Classic kicks off a full week of racing during this year’s Rally. Following the Speed Classic, The Spirit Of Sturgis Antique Motorcycle Races (open to pre-1970s vintage bikes) take place on Monday, August 7 (gates open at 4 pm). Fans are invited to an after party and vintage bike show immediately following the antique races on Monday evening at 7 p.m. at the historical Sturgis Half Mile track. Tuesday, August 8 the Sturgis Vintage Gypsy Run heads over to Black Hills Speedway for the American Flat Track Pro Half Mile and then Wednesday is the Sturgis Motorcycle Museum’s Hall of Fame Induction Ceremony.  Read more of the article here.

The Sturgis Motorcycle Museum & Hall of Fame’s mission is to collect, preserve and interpret the history of motorcycling; honor those who have made a positive and significant impact on the sport and lifestyle; and pay tribute to the heritage of the Sturgis Rally. Our vision is to continue as a world-class museum offering comprehensive and educational exhibits and showcasing rare and unusual motorcycles significant to our history and our sport. The Sturgis Motorcycle Museum & Hall of Fame stands out because of the fact that we not only document the history of the machines, we document the history of the people who have shaped and changed the sport and lifestyle. This will be a resource and inspiration for future generations. Honor the Ride… Build the Legacy!

The Lodge at Deadwood, 100 Pine Crest Lane, Deadwood, SD 57732
Tickets and reserved tables for the 2017 Sturgis Museum Hall of Fame Induction Breakfast are now available for purchase by calling 605-347-2001 or here.

The Class of 2017  Read more on each person here

This Coin Can’t Be Bought! But it can be yours!

It can be yours for getting involved at the 77th Annual Sturgis® Motorcycle RallyTM between August 4th and August 13th 2017!

Only three ways you can get a coin during the SMR 2017 Rally:

Only 2000 numbered coins minted! You don’t want to miss out.

Don’t forget that there will be tons of concerts at all the venues throughout the week.

If you are arriving on the weekend here is Saturday List of bands and where they are playing for you.

We hope that you will have loads of fun if you decide to go let us know at the link below on any one of our social media pages and don’t forget to show pictures, we will continue to update you on information till the Sturgis 77th Anniversary Motorcycle Rally starts and what is going on during the rally as well.

Let AMERiders keep you up to date with information on the Sturgis 77th Anniversary Motorcycle Rally.