Mr. Roper is not just the name of a character on Three’s Company, he is also the person that invented the motorcycle. Today AMERiders gives you information Sylvester Roper the Inventor of the Motorcycle. Not only was he the inventor of the motorcycle he was also the first man to die on one as well as an American Hero. He is most aptly known as an American inventor and transportation pioneer who built a steam-powered motorcycle in 1869. We figured this would be great post riding on the coattails of some our Veterans Day posts.

Who was Sylvester Roper 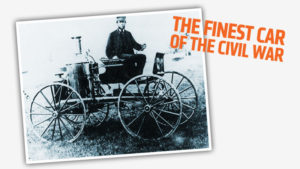 Born in Boston in 1823, Sylvester Roper proved himself to be a gifted mechanic and inventor from a very young age. When most kids of his era were pushing iron hoops down the road with sticks or boiling paraffin or telegraph-tweeting or whatever the hell kids did back then for fun. He was building steam engines and inventing new types of sewing machines.

Eventually, he turned his attention to steam-powered vehicles, and while he wasn’t the 1st, he did have a working, drivable steam carriage as early as 1863. Just think about that for a moment. When our country was still in the middle of a war trying to decide if certain groups of people were property or not, this guy was out, driving around in a car.

It seems that being an incredible badass with a car 50 or so years before everyone else would catch on wasn’t enough for Roper, so he decided to start experimenting with two-wheeled steam vehicles, perhaps out of a desire to head to the California Territory where he could lane-split. 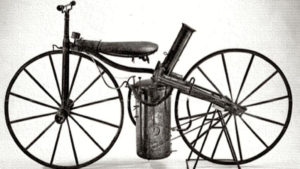 By 1867, Roper had built his first steam velocipede, and he was hooked. Built on what is likely a purpose-built frame (there’s some contention on that), Roper’s machine hung the boiler right below the rider’s junk (not a worry if you were Roper, who seemed to have balls made of the finest forged steel), with the twin pistons flanking the frame to either side. The water tank was saddle-shaped and used as a seat, and the wheels were solid iron. Oh, and true to its future progeny, there was a nice big steam pipe exiting behind the driver, hopefully, chromed.

To operate the motorcycle, Roper came up with the twist-grip method we know and love today, though a bit different: the whole handlebar twisted as a unit, forward giving throttle, and backward applying the not-too-effective spoon brake. It’s a pretty intuitive interface if you think about it. 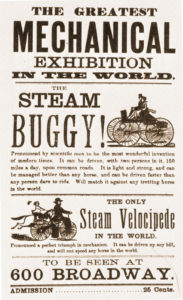 There was so much about this 328cc steam motorcycle that sets the template for the future: a pressure gauge right where we expect the instruments on a modern motorcycle, an engine-powered water pump, spring suspension of the drivetrain—it’s a truly ingenious machine.

We should mention that there are some people who don’t consider Roper’s machine to be the first motorcycle because it wasn’t gas-powered. and say that’s insane. You put a motor between your legs on a bike frame, and that’s a motheradoring motorcycle, period. So shuddup, you.

From this beginning, Roper kept developing, culminating in his safety-bike-framed version that he’d been refining from 1884 until he died on it in 1896. It was described at the time as being about 8 HP, and the whole assembly only weighed about 150 lbs, with coal and water, which is damned impressive.

Die doing what you love!

Sylvester Roper did many exhibitions and shows involving his carriage and motorcycle, and from all accounts seemed to genuinely enjoy riding the motorcycle. He died doing what he loved in 1896 when while riding on Boston’s Charles River bicycle track, he was hauling iron ass at 40 MP when his bike appeared to wobble, and then crash.

The cause of death was found to be a heart attack, though whether it was the cause or the effect of the loss of control isn’t really known. A Boston Globe obituary suggested that Roper had cut off the steam prior to crashing, indicating that he knew something was wrong.

We’ll never really know, and, in the end, it doesn’t matter. Sylvester Roper was one of those incredible combinations of brains and balls (or ovaries, as the case may be) that are the driving force behind so much of what’s good in the world.

So, raise your tepid beers to the sky and give some thanks to old Sylvester, the American hero.

We want to remind you that Thanksgiving is around the corner and it is that time that we all gather with friends, family and loved ones. Gathering for to watch gorgeous parades, watch great football, and have some good eats. Not only that it is also the time to be thankful for all that we have. So we ask that you think about who and what you are thankful for, because you don’t know what you have till it’s gone as the song says.

Here at AMERiders, we are thankful for all of our customers because if it wasn’t for you we wouldn’t be who we are and we Thank you for being here for us.

Let AMERiders give you all kinds of information including info about Sylvester Roper.