Happy Valentine’s Day to All Our AMERiders Friends and Family, we hope you have or are having a good one today! We thought we would give you a little background and some interesting info to think about. What does Valentine’s Day mean, where did it come from and what do some bikers do on it. 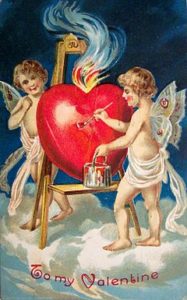 Valentine’s Day, also called Saint Valentine’s Day or the Feast of Saint Valentine, is celebrated annually on February 14. Originating as a Western Christian feast day honoring one or two early saints named Valentinus, Valentine’s Day is recognized as a significant cultural, religious, and commercial celebration of romance and romantic love in many regions around the world, although it is not a public holiday in any country.

Martyrdom stories associated with various Valentines connected to February 14 are presented in martyrologies, including a written account of Saint Valentine of Rome’s imprisonment for performing weddings for soldiers, who were forbidden to marry, and for ministering to Christians persecuted under the Roman Empire. According to legend, during his imprisonment, Saint Valentine restored sight to the blind daughter of his judge, and before his execution, he wrote her a letter signed “Your Valentine” as a farewell.

The day first became associated with romantic love within the circle of Geoffrey Chaucer in the 14th century, when the tradition of courtly love flourished. In 18th-century England, it evolved into an occasion in which lovers expressed their love for each other by presenting flowers, offering confectionery, and sending greeting cards (known as “valentines“). Valentine’s Day symbols that are used today include the heart-shaped outline, doves, and the figure of the winged Cupid. Since the 19th century, handwritten valentines have given way to mass-produced greeting cards. In Europe, Saint Valentine’s Keys are given to lovers “as a romantic symbol and an invitation to unlock the giver’s heart”, as well as to children, in order to ward off epilepsy (called Saint Valentine’s Malady). 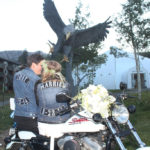 Everybody has their own way of celebrating the Valentine’s Day. Those who have dates, be they men or women or teenage girls or boys, go on their dates to enjoy themselves to their fullest and to confess their feeling for their loved ones. Those who don’t have any dates go to the places with their friends. Love is in the air on the Valentine’s Day and everybody just goes with it. Bikers do the same but sometimes we go a different route.

We make take our girls on a sweet bike ride to a wonderful, interesting, or even romantic place for dinner or lunch. Some like this year will gather with other couple and get married. The Daytona Beach News-Journal posted an article about part is below.

“In Daytona, Florida this year Clerk’s offices in Volusia and Flagler counties are put on group weddings on today.

Cupid, aka Volusia County Clerk of the Circuit Court Laura Roth, will preside over two ceremonies in Daytona Beach and DeLand, while Flagler County Clerk Tom Bexley will conduct one ceremony in Flagler. “It’s a perfect day to get married,” Roth said.

Roth will first conduct a group wedding at 11 a.m. on Valentine’s Day at the pavilion on the Halifax River at City Island Park, 125 E. Orange Ave., Daytona Beach. Afterward, she will drive west to perform another group wedding at 3 p.m. in the rotunda of the historic Volusia County Courthouse, 125 W. New York Ave., DeLand.”

See rest of the article by Daytona Beach News-Journal Here.

Getting married on Valentine’s Day In Daytona? Why not it’s a perfect time since the 77th Anniversary of Daytona Bike Week is coming up in a couple weeks starting on March 9 – 18, 2018. We will give you more information on that next week.