Guardian Bells are a time-honored tradition for bikers everywhere. In a nutshell, A motorcycle bell is supposed to ward off bad luck and evil spirits and are often called “Road Gremlins,” by many bikers. According to the legend, biker bells are most effective when received from a friend or a loved one and hung at the lowest spot on your motorcycle. The sound of the Motorcycle bells are supposed to deter bad luck and misfortune from sabotaging your trip and keep you safe from road hazards, mechanical failure, and spills. But how did this story get started or what is the actual story? We did some digging and found this story in several places across the net:

The Story of the Guardian Bell

“The old legend goes that one night a single old biker was headed home from a road trip to Mexico where he filled his saddlebags with gifts and trinkets for the kids that lived at a group home where he worked.

He drove along feeling blessed for his own life, the people in it and most importantly his bike, that had never let him down. He and his bike spent many years roaming the roads together and had a close relationship.

The biker was about 40 miles north of the Mexican border unaware that in the high desert ahead of him waited, a small group of road gremlins.

Road gremlins are the evil little creatures that leave obstacles in your path- old mufflers, pieces of rubber, boxes, that one shoe you always see and things like that.

Road gremlins hope to make a biker crash so they can rejoice over their little acts of evil.

As the biker rounded the curve, the road gremlins ambushed him, causing him to crash and skid before coming to a stop near one of his saddlebags that had ripped off his bike.

The biker lay there, helpless and unable to move as the road gremlins made their move towards him. The biker- being typical of many bikers – wasn’t going to give up easily and started throwing things from the saddlebag at them. Finally, he had nothing left to throw but a tiny bell and he started ringing it in hopes of scaring them off.

Not far away, two other bikers had made camp for the night and were talking around the fire when they heard the sound of the bell. Their first thought was that it was church bells so they went to go find out for themselves.

They came across the old biker lying in the road with the gremlins about to finish him off. Bikers are part of a brotherhood and because of that, the two other bikers chased off the gremlins, saving the old biker from their attack.

The old biker offered to pay for their help but in an unwritten code of true bikers, they refused payment. The old biker wanted to show his gratitude and wouldn’t let the two bikers leave without showing a sign of appreciation for their good deed. The old biker cut off two pieces of leather from his saddlebags tassels and tied a bell to each piece. He then attached the bells to the two bikers bikes as close to the ground as possible.

The old biker then told his new friends that with those bells attached to their bikes, they would be protected from the road gremlins and if they were ever in trouble, to ring the bell and a fellow biker would come to their aid.”

Now whenever you see a biker with a bell you’ll know that he has been blessed with the most important thing in life love or friendship from a fellow biker or a loved one.

Road Gremlins can’t live near these Guardian Bells because they get trapped in the hollow of the bell. Their hearing is hypersensitive so the constant ringing in a confined space drives them insane. They lose their grip and eventually fall onto the roadway this forming those irritating potholes. 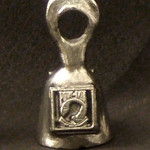 The magic of the bell will still work if you buy the bell yourself, however, if the bell is received as a gift from a friend or a loved one the magic is doubled because out there somewhere you have a friend looking out for you.

NEVER! Steal a Bell from a biker, If you do, you steal all the gremlins and the evil that comes with them. It is ill-advised that you steal a bell, the consequences could be dire.

Guardian Bells are more of a tradition than a superstition amongst many bikers… which means they make a great gift for the rider in your life! Check out our Biker bells that are Hand-sculpted from 100% lead-free pewter. At AMERiders’  we have a large selection of bells that come in a variety of designs ranging from patriotic symbols of the armed forces to animals such as dragons, butterflies, and much more.

Keep Good Fortune on Your Side With Guardian Bells From AMERiders.com