AMERIders loves to have discussions with its readers and today we bring into question another fun discussion Which Bobber is Best? Harley-Davidson, Indian or Triumph? What is your favorite? As a blog manager, and writer I have a pretty awesome job. It’s not always great – no job is – but this particular gig counters the not-great stuff with the fact I get to ride motorcycles, go on motorcycle rides, get the scoop on new motorcycles and write about all things motorcycles which I love. And over the past year, there have been three motorcycles I’ve talked with people about that, and that they have said they have loved riding the most. And they have been the various interpretations on the bobber theme. These have been presented by Harley-Davidson, Indian, and Triumph: the Street Bob, Scout Bobber, and Bonneville Bobber.

Of course, the obvious question I had to ask was: Which interpretation is best?

I realize there are some members of the old school who will argue that none of these bikes are “true” bobbers by the very nature of their being production models, but let’s just put that argument to the side for now. Definitions change. It seems the current definition of a bobber is an aesthetically stripped-down cruiser with mid-set pegs and a solo seat. Even that definition is a loose one (pegs on the Scout Bobber are a little far forward to be called mid-set), so it’s no surprise that each of the brands has offered up a uniquely different take.

Another important aspect of a bobber, it seems, and one that is no less difficult to define is the concept of heritage. Bobbers are bikes that aesthetically harken back to a different time – ostensibly the post-WWII era when returning servicemen stripped their bikes of all unnecessary weight for the sake of going faster. Each of the three brands trade heavily on a heritage that stretches back more than a century; Indian traces its roots to 1901, Triumph to 1902, and Harley-Davidson to 1903. Harley is the only member of the group that can claim to have actually been manufacturing motorcycles the whole time, but all three can legitimately claim to have been part of the original bobber movement. (I will write about Bikes in the Military in the coming weeks)

Before we get to the question of which has delivered the better modern interpretation, however, let’s remind ourselves of what we’re dealing with: 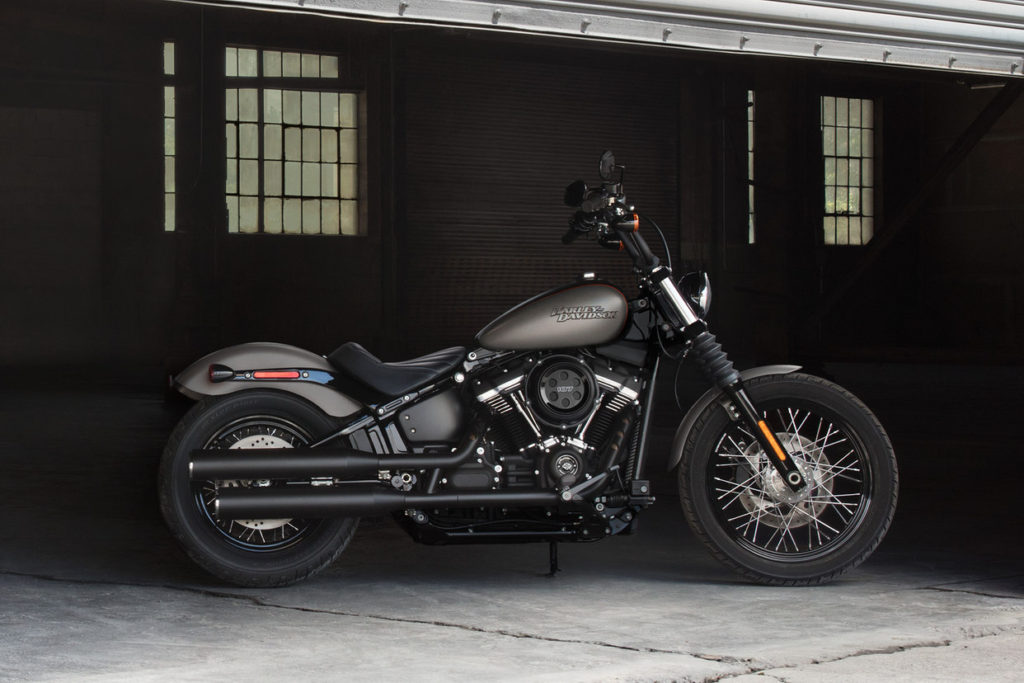 First introduced in 2006 as a Dyna, the Street Bob was reborn in late 2017 as part of Harley’s complete overhaul of the cruiser lineup( we will get you a good look at the new line up next week) – Dynas were scrapped and Softails completely changed. Equipped with an all-new engine, chassis, and suspension, the new Street Bob is markedly better than previous iterations. As seen in many reviews I read,  “The Street Bob has managed to keep most of the elements that are loved about the previous model while eliminating or alleviating the stuff that was not liked.”

As a Harley, it is, by default, the standard by which all other bobbers are measured. High-quality fit and finish, a fun engine, and fantastic looks mean that standard is not an easy one to meet.

*Harley, of course, does not publish horsepower figures. This number comes from a recent Cycle World test of the 2018 Fat Bob, which is powered by the same engine. 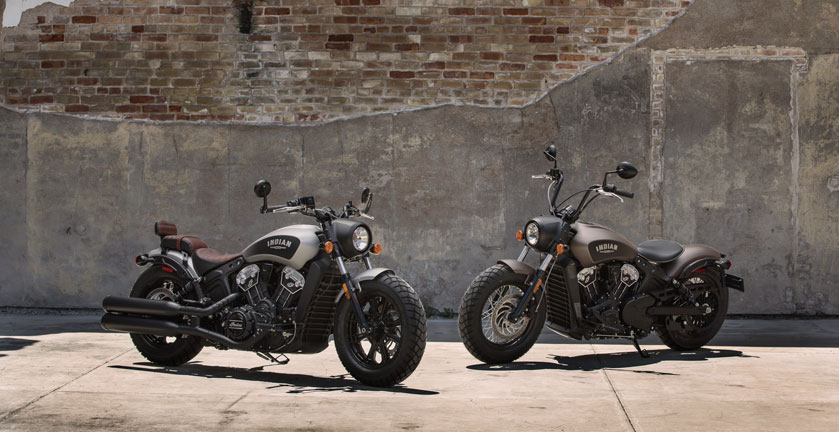 Unveiled in summer 2017, the Scout Bobber makes use of the same chassis and liquid-cooled engine as the standard Scout, which was first introduced back in 2014. Different tires and riding position, however, manage to deliver a unique riding experience – one that feels better suited to making the most of the heralded powerplant. As seen in many reviews I read: “It’s far and away the best cruiser engine they’ve ever experienced… but would be equally delighted to see it housed in anything from a naked to an adventure bike.”

Quite possibly the best example to date in terms of what Indian is capable of, the Scout Bobber’s fit and finish shows a tremendous amount of attention to detail. It’s clear that parent company Polaris cares deeply about the brand and is eager to see it thrive. 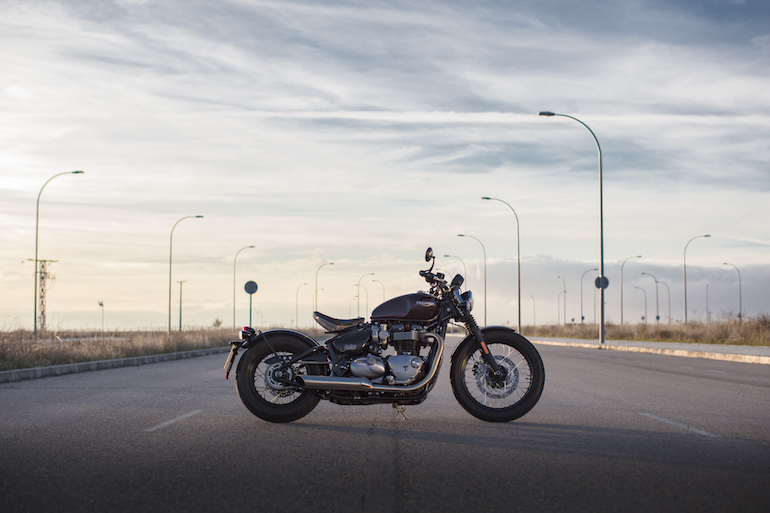 Triumph’s artful take on the bobber was introduced to the world via a lavish and loud warehouse party almost a year ago, but the bike didn’t really start arriving at dealerships until the start of this year. Unique to the trio in its use of a liquid-cooled parallel twin engine, the Bonneville Bobber offers a somewhat sportier take on the bobber concept – thanks in part to a lean angle more generous than that found on the other two.

Aesthetically, the bike is a… ahem… triumph, demonstrating a level of fit and finish that would have been unimaginable from the British manufacturer even five years ago. Similar to the Indian, it is littered with tiny branded touches that show dedication and care. More recently, Triumph has introduced the Bonneville Bobber Black – a blacked-out version of the Bonneville Bobber that comes with dual front discs and adds cruise control to the list of standard items. For the purpose of this discussion, though, let’s keep our focus on the standard Bonneville Bobber.

So, Which One is Best?

The Triumph Bonneville Bobber easily takes the prize when it comes technology and comfort. It is packed with standard goodies like ABS, traction control, riding modes, and “torque-assist clutch” (aka slipper clutch). The only one of these you’ll find on the Harley or Indian is ABS, and in the United States that feature is an extra that will cost more. Meanwhile, the seating position on the Triumph is adjustable, which means you automatically have a better shot at being comfortable. 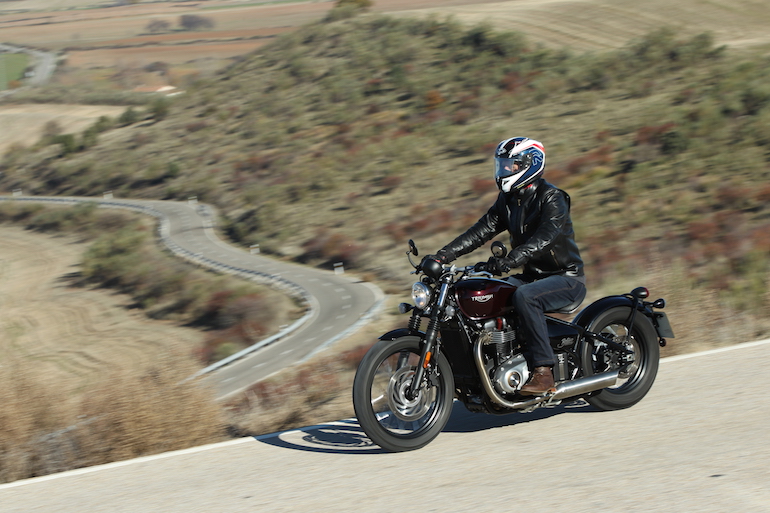 Even in its more aggressive stance, some prefer the Triumph for frames like over 6ft. The Harley has an odd riding position that is ultimately fun but takes some getting used to, whereas the Indian’s stock rider triangle is pretty challenging for a gangly fella.

The biggest strike against the Triumph is the fact it relies on chain final drive. The other two are belt-driven, which makes life a lot easier. Cleaning and lubing the Triumph’s chain will require a paddock stand at the very least, and adjusting chain tension is the sort of pain-in-the-ass task that, I’m certain, is at the heart of most people’s decision to buy shaft-driven bikes. Additionally, the Bonneville Bobber’s 9-liter tank (2.3 US gallons) is the tiniest of the bunch (12.5 liters for the Indian; 13.2 liters for the Harley).

The Indian scores the W when it comes to starting price, but that’s a false savings since ABS costs extra (if you want ABS, the Triumph is least expensive). I’ll also give the nod to the Indian when it comes to aesthetics. Just barely. And that’s obviously a matter of personal taste, which could be influenced by your personal bias toward a motorcycle brand. I have a special place in my heart for a certain brand myself, so it should come as no surprise that in a contest between three beautiful machines I’m going to choose the one with “Harley” written on the tank. Truthfully, you can’t go wrong with any of them. 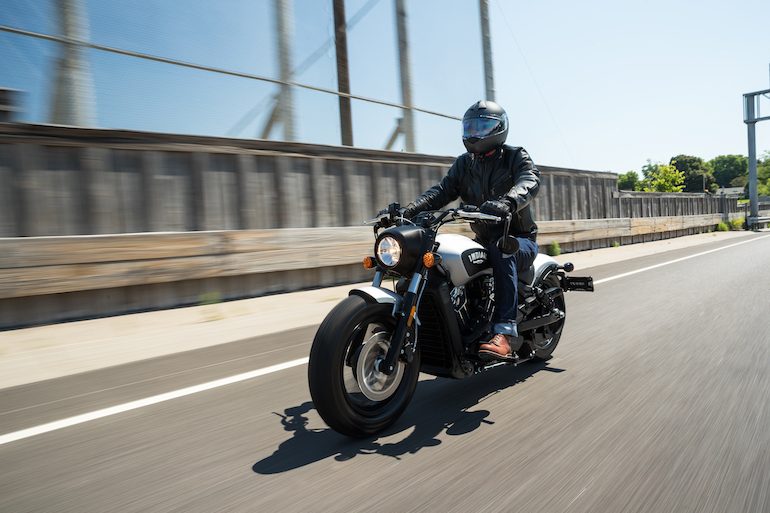 In terms of engine, the Indian wins as the Scout Bobber’s 1133cc powerplant give you the best elements of the other two contenders – the sportiness of the Triumph and the visceral meanness of the Harley – with the benefit of considerably more horsepower. The ability to tear away in a generally un-cruiser-like manner will put the spirit of hooliganism in you. As such, although the Indian lacks the Triumph’s capacity to lean it feels better suited to zipping through traffic; a particularly low center of gravity aids this.

The biggest drawback of the Scout Bobber is that it does feel quite tiny if you’re 6 feet 1 inch tall; its seat is particularly low to the ground and the riding position scrunches you up. Not as much as on the Harley, but enough to make you feel small. Which is a strange way to feel on a 255kg bike that’s 2.2 meters long. The feeling is alleviated somewhat by the addition of mini ape-hanger handlebars, which allow you to sit more upright and give you a greater sense of commanding the bike.

Lastly, where the Harley really manages to beat the other two is in presence and, possibly, gravitas. With its enormous Milwaukee Eight V-twin rumbling between your knees, the Street Bob feels the most substantial. The Harley’s riding position is by far the most squished but you don’t notice as much because the bike is bigger, and it feels that way: not huge, nor oversized, but of decent bulk.

Aesthetically, whereas the Indian and Triumph are steeped in ornate touches, the Harley sticks a little more to the bare-bones spirit of a bobber. Everything is done very, very well, but the Street Bob looks a little more rough and ready, a little more willing to be caked in mud, and a little more likely to look cool with rust. (am I, right? oops sorry is that my opinion sticking in there?)

Additionally, you simply have to acknowledge the strength of the Harley-Davidson name. It means something. People who don’t ride know what a Harley is; that isn’t necessarily the case for a Triumph or an Indian. Harleys are the only bikes I’ve ever ridden that have inspired people to salute as I’ve ridden past. For some riders, the Harley name has value greater than any other.

Harley’s biggest weakness is the fact it weighs 42 kg (93 lbs) more than the Indian or Triumph. The weight is low, so you don’t notice… until you jam on the brakes. All three bobbers run with a single disc up front and a single disc in the rear. It feels like enough (barely) on the lighter bikes, but on the Harley you definitely notice.

Ultimately, the answer to the question of which of these three bobbers is the best really depends on the person who’s ponying up the dough to buy it. It’s an individual decision. Does the bike fit your tastes, your riding style, etc? But, of course, that’s a cop-out answer; let’s choose a winner, dammit.

If you were to put a gun to my head, after a long period of back and forth I’d probably (and perhaps unsurprisingly, considering my bias) choose the Harley.

It’s the engine that does it for me. The Harley feels more substantial and has the insane amount of “Wheeee!” that the I love.Don’t get me wrong I have been on some of the other and they ride well. But it’s the rumble of an H-D that does it for me. Others will say it different but again that is only with a gun to my head. there is no clear winner here unless you yourself choose one.

We will be getting you the information on all the new lines ups for each of these heavy hitters in the next few weeks. So keep Reading.

Let AMERiders keep you up to date with information on the Harley-Davidson, Indian or Triumph Bobber lines.